Tether is the issuer of the cryptocurrrency world's premier stablecoin, USDT. Stablecoins aim to guarantee the value of cryptocurrencies in dollar terms, hedging volatility risk and making it easier to realise notional gains from cryptocurrency's wild price rises. But Tether's relationship with the main cryptocurrencies, particularly Bitcoin, is controversial. There is a raging battle between those who think that USDT issuance pumps up the price of Bitcoin, and those who argue that USDT issuance has nothing to do with Bitcoin's price. But in my view, the truth is more complex. Tether's asymmetric mechanics both support and disprove the arguments of both sides.

USDT, Tether's "token", is a representation of the US dollar that can be readily traded on cryptocurrency markets. People exchange dollars for USDT, then use the USDT to buy and sell cryptocurrencies. They do so secure in the belief that each USDT token is always worth 1 US dollar. And so far, USDT has not disappointed. The dollar price of USDT was wild to begin with, but it quickly calmed down and now doesn't deviate much from its 1:1 US dollar peg:

USDT doesn't have 100% cash dollar backing, so the extent to which it can hold its 1:1 peg to the dollar depends entirely on the credibility of its issuer and the confidence of traders. You'd think that Tether's shady history might make traders wary of using USDT as a dollar guarantee. But so far, traders seem to think that the risk of not getting their real dollars back is outweighed by the convenience of trading in the cryptocurrency world's version of the US dollar.

To understand just how complicated this relationship is, we must first dismiss the argument that USDT issuance explicitly pumps up Bitcoin's price. This argument relies upon a misunderstanding of the nature of a stablecoin. In a way, "stablecoin" is a misleading name. Stablecoins don't stabilise anything except their own price in terms of the fiat currency to which they are pegged. And they trade as financial instruments in their own right, independently of Bitcoin or other cryptocurrencies. All other things being equal, therefore, Tether can issue as many USDT as the market for USDT will bear, without affecting the prices of the cryptocurrencies that would be traded using those USDT. There is no direct relationship between the supply of USDT and the price of Bitcoin.

However, this does not mean that there is no relationship. By providing a liquid proxy for fiat currencies that can be hard to trade on cryptocurrency exchanges, Tether makes it easier to trade cryptocurrencies. Making it easier to trade an intrinsically scarce asset for which there is substantial untapped demand is bound to increase its price. And for investors, knowing they can easily cash out into a US dollar substitute may make them more enthusiastic about trading cryptocurrencies. So, the extent to which USDT issuance raises the price of Bitcoin is determined by the amount of untapped demand that can be released by increasing exchange liquidity and investor confidence.

When Bitcoin is in a slump, USDT issuance won't raise its price. It might even depress it, because it will make it easier for nervous investors to cash out into something closer to dollars. Richard K. Lyons and Ganesh Viswanath-Natrej found that USDT acts as a "safe haven" for investors. And it's certainly promoted as such. For example, this is how the cryptocurrency exchange Kraken explains it: 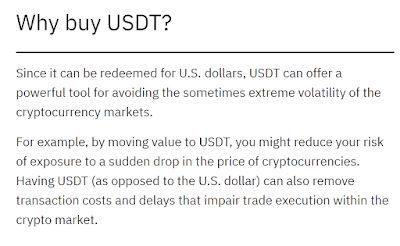 So, if Bitcoin's price is falling, demand for USDT is likely to increase because of investors wanting to cash out.

Conversely, when Bitcoin's price is rising, there is also likely to be rising demand for USDT from investors wanting to buy in. In either direction, therefore, Bitcoin's volatility is great for USDT. Stabilising Bitcoin's price in dollar terms is the last thing Tether's owners want to do. Roll on, rollercoaster.

Rising demand for USDT raises its dollar price. But USDT is a stablecoin. It is not supposed to deviate from par. In normal circumstances, arbitrage is probably sufficient to maintain the peg. But when Bitcoin is experiencing high volatility - in either direction - demand for USDT can increase far faster than arbitrageurs can bring it down. To prevent the dollar peg breaking, therefore, Tether must respond to this extra demand by issuing more USDT. As already noted, issuing more USDT increases exchange liquidity, making it easier to purchase or sell Bitcoin and therefore feeding the price movement. So wild swings in Bitcoin's price might not be triggered by USDT issuance, but they most definitely can be fed by it.

The asymmetric mechanics of USDT issuance can be clearly seen in this chart from Nomics:

Bitcoin has had a bumpy ride in 2020, with several price crashes and recoveries. USDT issuance increased both when Bitcoin's price was falling (in August-September, for example) and when it was rising (October-November). This is consistent with my case that USDT issuance increased to accommodate safe haven flows when Bitcoin's price was falling, and is now increasing to accommodate new investor demand as Bitcoin embarks on its latest bull run.

So, if USDT demand can increase both when Bitcoin's price is rising and when it is falling, what would force Tether to reduce issuance, or even burn USDT?

It should be obvious from this analysis that what feeds USDT demand is Bitcoin volatility. So, if the price of Bitcoin stabilised, USDT demand would fall. Would Tether have to burn USDT? Possibly. It would depend whether investors thought Bitcoin stability was here to stay. Those who predict that institutional acceptance will eventually stabilise the price of Bitcoin might want to ponder the future of USDT in such a scenario.

But there is another scenario under which Tether would have to burn USDT, and rapidly. That is what we might term a "run on Tether". If traders suddenly decided that the risk of not getting their dollars back outweighed the convenience of USDT liquidity, they would dump USDT in favour of USD. The fact that USDT supply is now known to be fractionally reserved, and Tether is facing litigation, surely makes this more likely. After all, when depositors lose confidence in fractionally reserved banks, they withdraw their funds. And what are the purchasers of USDT but depositors in a fractionally-reserved, unlicensed, unregulated and possibly fraudulent "shadow bank"? Really, the wonder is that traders still think the benefits outweigh the risks.

The classic way of ending a run is for the financial institutions concerned to close their doors. Tether's legal documentation makes it pretty clear that anyone who thinks they would be able to redeem their USDT for actual dollars is dreaming:

In the event of a run on Tether, exchanges would be likely to suspend trading in USDT/USD. However, one exchange might find this difficult: Kraken has just acquired a banking licence (of sorts) and says it will have access to the Federal Reserve for dollar payments. Whether Kraken can suspend USDT/USD trading will therefore depend on how the Fed views USDT. If it regards USDT holdings as dollar deposits, the Fed might take a dim view of Kraken failing to facilitate exchange of USDT for dollars. But if the Fed thinks USDT is just another speculative asset, then caveat emptor applies. The Fed has no responsibility for bailing out the holders of speculative assets.

While Bitcoin remains volatile, Tether will continue to be able to issue USDT with impunity. Until, that is, its reputation catches up with it. Then we will see the mother of all crypto crashes. Buckle up, punters. It's going to be a bumpy ride.