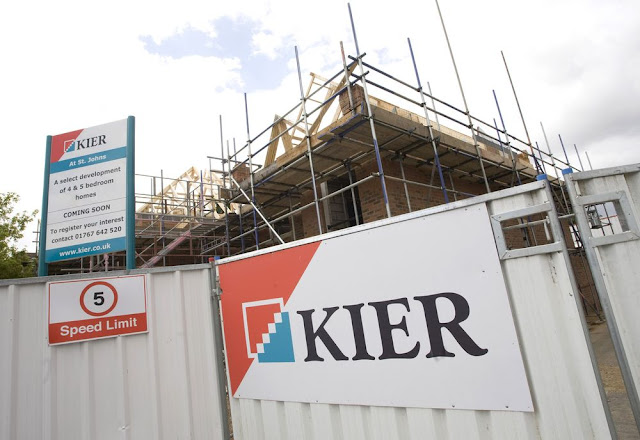 Yesterday, the outsourcer Kier Group announced a major restructuring. The announcement makes grim reading. The company will divest or close down three of its business lines, with the loss of 1,200 full-time equivalent (FTE) jobs, half of them by the end of this month. The dividend will be suspended for two years. Kier's share price fell on the news, closing down 17.43%.

Remarkably, some analysts took the restructuring announcement as a "buy" indication, which might explain why its share price has recovered slightly today. I wouldn't, personally. Kier is in big trouble, and has been for some time. Admittedly, Andrew Davies, its new CEO, has wasted no time in getting to grips with the company's problems: the proposed restructuring is certainly drastic. But given how difficult the outsourcing market is now, I will take some convincing that it will be enough to turn the company round.

Interim results for the half-year ending December 2018 - the latest accounts available - report a before-tax statutory loss of £35.5m. The notes to the accounts show that the statutory loss was primarily caused by a slew of one-off costs, of which the most significant by far were substantial provisions on two major contracts (highlighted): 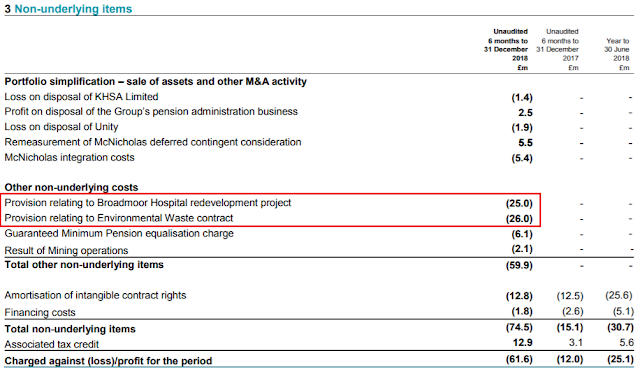 In plain English, this means that the company has lost £51m on those two contracts.

For a highly indebted company with not much in the way of assets it can sell, losing money on non-performing contracts is bad news. The interim results also show increasing cost of sales, rising finance costs - and a £10m loss on its existing restructuring programme. £14m of expenditure had only resulted in £4m of cost savings.

In a fine piece of spin, Kier blithely pointed out that its total debt was lower than in the equivalent period of 2017. This is true, but only because of an emergency rights issue of £264m in November 2018. And despite this, by December 2018 short-term borrowing had risen to £49m, with an associated rise in financing costs that contributed to a nasty slide in underlying profit. Sharply rising short-term borrowing and rising finance costs are always an indication of financial distress.

For me, though, the most disturbing aspect of Kier's liabilities is trade payables of over £1bn, by far the largest single item:

The notes to the accounts reveal that £200m of this relates to "payments due to suppliers who are on bank-supported supply chain finance arrangements". This means that Kier is helping a substantial proportion of its contractors to borrow their own payments from banks. Kier Group is running the same scam as Carillion - using a Government-sponsored supply chain financing scheme to flatter its balance sheet at the expense of its SME suppliers.

I haven't highlighted it, but the sharp-eyed among you will note that there is also a pension deficit of nearly £50m. And to add to Kier's troubles, these interim results also reveal that previously reported debt was understated by some £40m due to an "accounting error".

On the asset side of the balance sheet is £434m of cash and cash equivalents, which seems reassuring, though £49.7m of it is encumbered by short-term debt liabilities. But the cash flow statement reveals net cash outflows from operations of some £145m, mostly due to a painfully evident slowdown in contract activity: 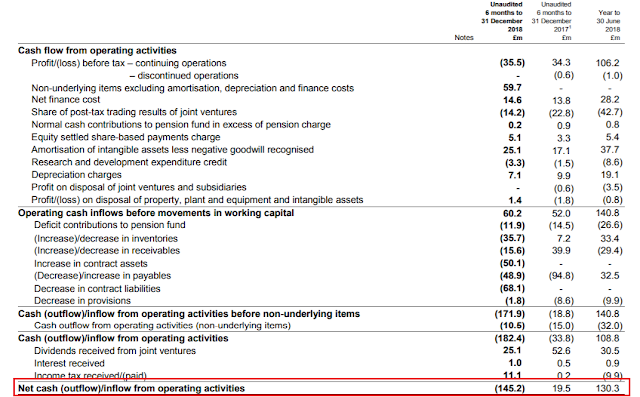 This is the killer item. £434m is no sort of buffer against net outflows on that scale. Cash reserves evaporate astonishingly quickly when a company is bleeding money at that rate. And when the cash is gone, so is the company.

These accounts were released in March. By June, the financial situation had deteriorated so much that it was forced to issue a profits warning (my emphasis):


As highlighted in Kier's FY2019 interim results, the Group continues to experience volume pressures within its Highways, Utilities and Housing Maintenance businesses. In addition, whilst continuing to perform well with double digit growth in its orderbook during FY2019, the Buildings business' revenue growth for FY2019 will be lower than previously forecast.

As a result, Kier now expects that FY2019 revenue will be broadly in line with the Group's reported revenue for the 2018 financial year and currently expects that the Group's underlying operating profit for FY2019 will be c. £25 million lower than previous expectations and that the Group is likely to report a net debt position as at 30 June 2019, which would have an adverse impact on its FY2019 average month-end net debt position.

Insufficient lucrative work, falling income, poor (if any) profits and rising debt. This is not a healthy company.

The proposed restructuring will be expensive, costing £28m in both of the full years 2019 and 2020. This will presumably include the costs of laying off all those people. The company says the aim is to deliver "sustainable cost savings" of £55m from 2021. I'll believe it when I see it.

An aspect of this restructuring announcement that I find particularly interesting is the change in how Kier intends to manage its debt. When looking at Kier's financials, I was struck by the focus on "average month-end debt". This is an odd term, since it implies that month-end debt is somehow different from debt the rest of the time. It appears that Kier has been in the habit of dressing up its balance sheet at month-ends to make it look less indebted than is in fact the case. Consequently, there has historically been considerable volatility in its working capital. This is highlighted in the restructuring announcement:


The disposals and other actions outlined above are expected to deliver a material reduction in the overall indebtedness of the Group. They will also reduce the historical volatility in the Group's working capital profile. Going forward, Kier will focus on managing its retained businesses to deliver long-term profits and a sustained reduction in the Group's underlying debt levels rather than targeting lower debt positions at reporting dates.

Being honest about its debt levels will require quite a culture change in Kier's finance division.

Kier's procurement and accounts payable departments need a culture change, too - not least because in the wake of Carillion, suppliers are less willing to tolerate long payment delays and participate in "supply chain finance" scams:


Kier understands that certain suppliers have experienced a reduction in the level of trade credit insurance available to them; Kier is working with those suppliers to mitigate the impact of this.

In plain English: Kier must treat its subcontractors better.

But Kier's overwhelming problem is that it is bleeding money at an unsustainable rate. The disposals and headcount reduction will staunch the outflows to some extent, but if is to survive long-term it needs to increase its cash income substantially. The restructuring announcement cheerfully says that the plan is to "embed a culture of performance excellence with a particular focus on cash generation to deliver reduced average net debt." This sounds like MBA mumbo-jumbo to me. Until I see some credible proposals for increasing net income and ending the cash drain, I remain sceptical that this company has a long-term future.

Clearing out Carillion's cupboards
The Misery of Mitie
The sad story of Maplin electronics
Interserve Teeters On The Brink Of Insolvency - Forbes
After Carillion, Capita's Profits Warning Comes As No Surprise - Forbes