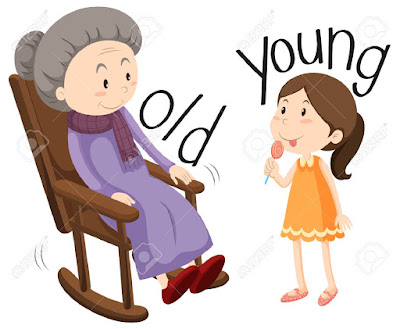 Most people want government to spend more money on them than on anyone else. This applies regardless of their tax contributions (those who don’t pay tax often demand more than those who do). And it is completely understandable. After all, charity begins (and when times are hard, ends) at home.

So when voters in the US were asked what the government’s spending priorities should be, it comes as no surprise to discover that their preferences varied by age: 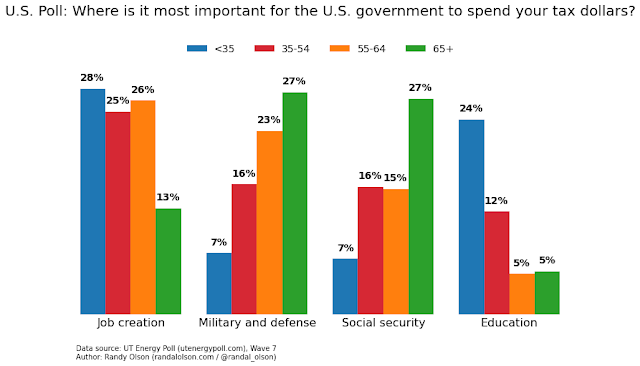 As we would expect, the priorities of the young are education and jobs, the priorities of those of working age are jobs and benefits, while the priorities of the middle-aged and old are pensions and associated benefits (US pensions, pensioner benefits, Medicare, disability benefits and family support are all bracketed together as “social security”, but pensions are by far the largest proportion). Older people are also much more concerned about defence, no doubt because they have lived through successive wars and threats of war that the young have yet to experience.

But I was frankly shocked by the attitude of the middle-aged and old towards education. Only 5% of middle-aged and old people think education should be a priority. I suppose their response would be to point out that only 7% of young people think pensions should be a priority. But this is comparing apples and pears. Pensions are paid to people who will never again be productive. Education improves the productivity of future workers. Pension payments are therefore consumption spending, whereas education is investment. So middle-aged and old people want the government to prefer consumption spending over investment. Where is the fiscal rectitude in that?

The response from older people is that they have “paid in” during their working lives, so are entitled to receive. Many people believe that their payroll taxes (NICs in the UK) are “saved” for them in the same way as if they were paying into a private pension or putting money in the bank. But this is a fallacy. State pensions and benefits are unfunded. The money paid in through payroll taxes/NICs may physically go into an investment fund, but it is then lent to the government to fund current spending. The money that workers pay in goes to pay the pensions and benefits of those currently in receipt. All that current workers have is a Government promise that when they need them they, too, will receive pensions and benefits.

However, that does not mean that what is paid now is necessarily what future claimants will receive. Governments promise to pay pensions and benefits, but they don’t guarantee either the amounts or the qualifying criteria. At the moment, governments around the world are raising pension ages and tightening criteria for benefit claims. When I started work, the age at which I would qualify for a state pension was 60. Now, it is 66. And my children will work for much longer. Currently, they both have a state pension age of 68, but this is likely to rise again before they get there. Other governments will perhaps raise ages more and faster. Some may reduce state pensions and benefits to a safety net for those who have no other means of support – which was of course their original purpose. But if so, those who have saved adequately in private schemes may lose their entitlement.

And this raises an interesting question. I increasingly hear young people saying that they do not expect to receive a state pension when they retire. For how long will the young be willing to pay into schemes from which they believe they will receive little or nothing? And if the young collectively refuse to pay into these schemes, preferring to make their own arrangements, what will happen to the pensions and benefits currently being paid?

But there is an even bigger problem. The voter preferences survey shows that older people want pensions and pensioner benefits to be prioritised over investment in the young. But young people want education and job creation to be prioritised over pensions. And it is the young, not the old, who win the economic argument. When the young have no jobs, poor education forces them to compete for jobs with low-skill, low-wage workers in other countries, or they are overburdened with tax-deductible debt such as student loans, their net payments into this system reduce. But the proportion of elderly in the population is growing due to the post-war baby boomers retiring, increasing longevity and falling birth rates. The combination of falling payments into the system with rising claims on it could force government to cut pension and benefit payments and tighten criteria even for existing pension and benefit recipients. If you think this can’t happen, just look at the Eurozone, where pensions and benefits to existing recipients have been sharply cut in several countries. Hardship for the young threatens the pensions and benefits of the old.

Thus far, I have been talking about unfunded (pay-as-you-go, or PAYG) Government pension and benefits systems. But moving to fully funded (FF) systems, or forcing everyone to save in private sector pension schemes (which are fully-funded by definition), doesn’t solve the problem. ALL pension systems, private and public sector, funded or unfunded, rely on the contributions of the young to support the old. In this paper, John Eatwell explains why:


In a PAYG scheme current taxes are being used to pay current pensions. In an FF scheme it is current savings which are being used to pay current pensions. Savings today are funding the pensions of today. Accordingly, the “burden” on the workforce, defined as the goods and services that are “extracted” from the income of workforce is exactly the same whether the nation’s pension scheme is FF or PAYG.

Another way of looking at it is this. In a PAYG government scheme, the pensions of the old are paid from the taxes of the young. In a fully-funded government or private sector scheme, the old hold their capital almost entirely in the form of the debt assets of the young and the debt and equity of companies that employ the young. Pensions for the old are paid from the return on that capital – the interest on the debt assets and the dividends and/or realised gains on equity. In aggregate, the share of national income going to capital must be high enough to support all those pensioners. This implies a lower labour share – which means reduced real incomes for the young. If the pensions of the old are the same under PAYG and FF schemes, the reduction in real income for the young will be the same under both schemes. If the young refuse to suffer the higher taxes, higher debt service costs and/or reduced real incomes necessary to support the old, then pensions must be cut. However you look at it, pensions for the old come from the incomes of the young. The prosperity of the old therefore depends crucially on the prosperity of the young.

So it is very foolish of the old to expect their pensions and benefits to be protected at the expense of the young. They should be demanding investment in education, training and skills development to ensure that as many as possible of the young have high incomes in the future. Investment in the young is investment in themselves. What a pity that few of them seem to see it that way.

Intergenerational unfairness
The Fund that isn't a fund
Raising interest rates is not that simple, Lord Hague
Pensions and stuff