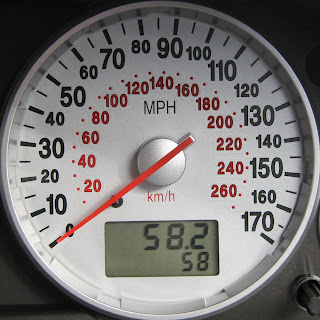 An accounting identity does not indicate the direction of causation. Not ever.

I’ve been caught out on this a few times myself, usually when I am trying to deduce something useful from national accounting equations. But I’m merely a writer. People actually involved in the formulation of policy should know better.

Here’s an attempt by people who should know better to try to infer the direction of causation from an identity. On the St. Louis Federal Reserve’s blog site is this post by Yi Wen and Maria Arias. It purports to show that the reason why three rounds of QE in the US have failed to raise inflation is because the velocity of money has collapsed. And they then come up with some reasons why velocity has collapsed, though sadly no ideas about what to do about it.

Their argument is based on the familiar Quantity Theory of Money:

where M is the monetary base M0, P is the price level, Y is real GDP, and V is the velocity of money. Sometimes real economic output Q is used as a substitute for Y.

What this equation shows is that NGDP is determined by the quantity of money in circulation and the velocity of transactions in the economy. Or – does it? Written like this, it actually suggests that the quantity of money in circulation and its velocity are determined by NGDP, not the other way round, since the identity on the left hand side is the dependent variable. But this is an identity. It could just as easily be written PY = MV. Indeed, sometimes it is.

But this equation does suggest that an increase in the monetary base should be associated with rising NGDP. The monetary base has increased dramatically since 2008, as this chart shows: 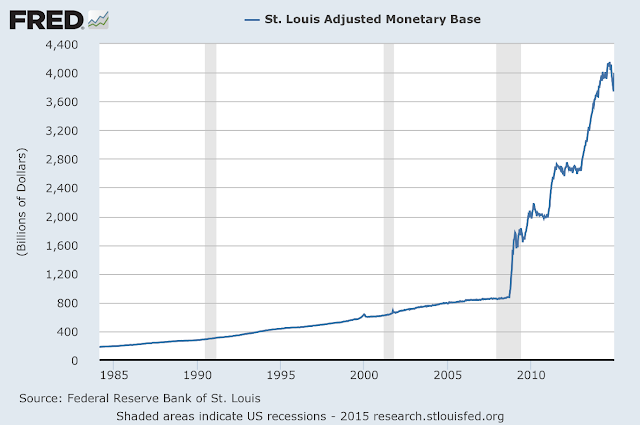 Wow. If this equation is right, then there should be a simply massive increase in either inflation or GDP or both. Here’s what the writers say:


Based on this equation, holding the money velocity constant, if the money supply (M) increases at a faster rate than real economic output (Q), the price level (P) must increase to make up the difference. According to this view, inflation in the U.S. should have been about 31 percent per year between 2008 and 2013, when the money supply grew at an average pace of 33 percent per year and output grew at an average pace just below 2 percent. Why, then, has inflation remained persistently low (below 2 percent) during this period?

And they go on to conclude that V must have collapsed. So far so good. Mathematically, this must indeed be the case, since

and we know that the numerator has not increased to match the rise in the denominator. But then their analysis goes horribly wrong.

They say that V falls when there are fewer transactions in the economy. This is true, but it is not the only possible explanation for such a large fall. The increase in the monetary base itself is sufficient to cause V to collapse even if the number of transactions in the economy does not change. This is because when there is more monetary base it does not need to “churn” so quickly in order to support the same number of transactions. It is simple mathematics.

The writers correctly describe the sharp decline in velocity as “offsetting” the sharp increase in money supply, but they then claim that this “leads to” almost no change in output and inflation. No it doesn’t. The causation could be entirely the other way round: stagnant output and low inflation cause velocity to fall when the monetary base is increased. We simply do not know which side of the equation is causative. Never, ever, try to deduce causation from an identity.

However, the writers then redeem themselves by asking the right question:

Why did the monetary base increase not cause a proportionate increase in either the general price level or GDP?

Why indeed. The answer, apparently, lies in this chart: 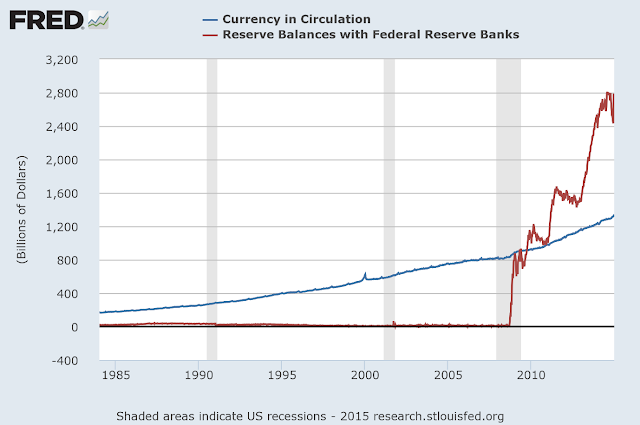 The writers claim this chart shows that people have been hoarding money instead of spending it. The fall in velocity is due to “an unprecedented increase in money demand”, caused by very low interest rates which have encouraged people to switch from interest-bearing assets into money.

But this chart doesn’t show anything of the kind. What it shows is the rise in reserves due to QE: the three rounds of QE can be clearly seen. The sharp-eyed among you will notice that the reserve balances in this chart and the adjusted monetary base in Chart1 look very similar. That is because they are almost the same thing. The adjusted monetary base is largely made up of bank reserves.

The quantity of reserves in the monetary system is determined by the Federal Reserve and cannot be changed by commercial banks. Lending does not reduce reserves. Nor does spending. And hoarding doesn’t increase them, whatever the writers of this piece may think.

The truth is that the enormous increase in reserve balances is entirely due to asset purchases by the Federal Reserve. This chart tells us absolutely nothing about what people have been doing with their money. It cannot be used to deduce that people are hoarding money instead of spending it.

So the writers made two errors: they inferred causation from an identity, and they misunderstood the cause of high reserve levels in the banking system. And because of these errors, they then go on to draw an entirely unwarranted and very dangerous conclusion:

There is a further error here, of course: the zero-interest rate policy is by no means solely due to unconventional monetary policy. But leaving that aside, it simply is not possible to deduce from the evidence presented in this piece that very low interest rates have made the recession worse.

QE does, of course, encourage people to substitute cash for bonds. That is its purpose. So even though reserve balances tell us nothing at all about private sector money demand, we would expect that money demand might rise because of QE. But that does not mean that people then sit on that cash. On the contrary, the behaviour of the stock market, bond markets and commodity markets over the last few years has shown only too clearly what people do with the cash they receive in return for bonds sold to the Fed. During the era of QE, stock market reached all-time highs, junk bond yields were on the floor and commodities have shown spikes and volatility. In 2014, when the Fed ended QE, the market price distortions caused by QE unravelled: commodity prices collapsed, there was a massive sell-off in emerging market bonds and the stock market wobbled (though it has since recovered). This is hardly compatible with the writers’ assertion that people hoarded cash instead of investing in riskier assets. Indeed, “reach for yield” by investors desperately looking for better returns in a low-interest-rate environment has been a matter of considerable concern to the FOMC. If everyone was sitting on cash as these writers suppose, “reach for yield” would not be a problem, would it?

When people don’t understand how the monetary system works they make gross errors which can lead to unfortunate conclusions and damaging policy recommendations. Raising interest rates because of a mistaken belief that high reserve balances arise from people hoarding cash would be catastrophic in a recessionary economy. I find it very worrying that two Federal Reserve economists are apparently so ignorant of the system of which they are part.

But of course, they DID ask the right question. Why hasn’t such a large increase in M resulted in sharply rising output and inflation?

They are not looking at the right M. The monetary measure they should be looking at is the money actually used for transactions in the economy, which is broad money M2. And the picture for M2 is very different: 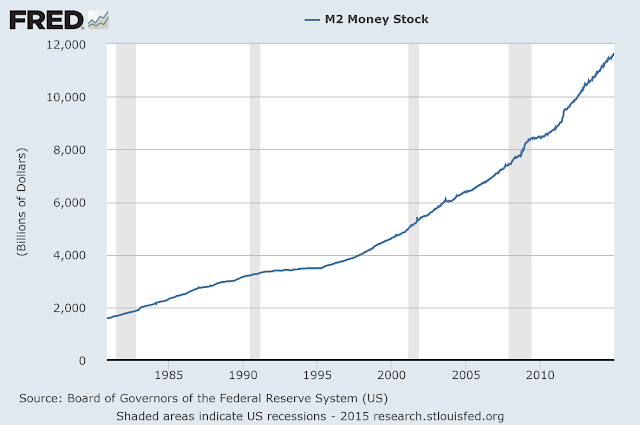 Well, well. Seems M2 growth is, er, pretty normal. M2 is increased by bank lending……so raising M0 to the skies did not have any significant effect on bank lending. The so-called money multiplier, which is the arithmetic relationship between M0 and M2, is broken. If it ever was a useful predictor of bank lending growth (which is questionable), it certainly isn’t now.

To complete the picture, this is M2 velocity: 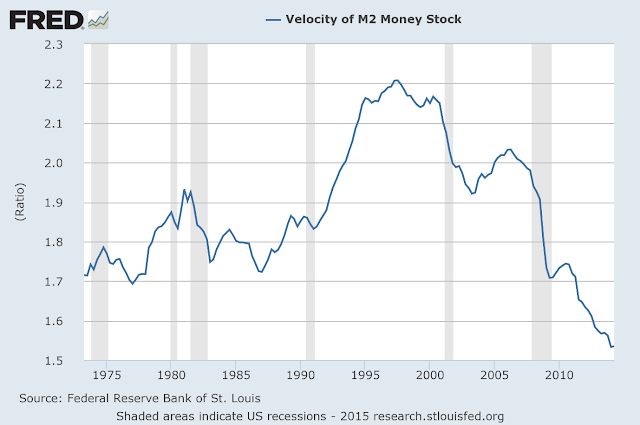 Now, we have normal M2 growth, so - unlike the M0 velocity fall - this is genuinely a fall in velocity due to lower transaction volumes. And it is associated with stagnant NGDP.

But I’m not about to tell you which causes which. After all, one should never deduce causation from an identity.


This post was written in 2014 and originally posted on the online magazine Pieria under the title "When Wonks Get Things Wrong". As Pieria has now folded, I have re-posted it here, updated in the light of subsequent developments.