The EU is not a bastion of protectionism 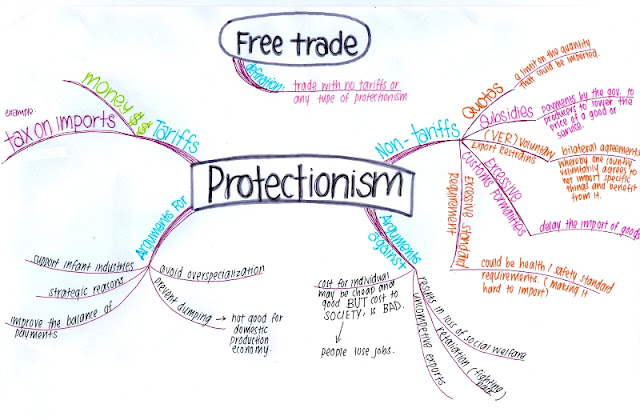 Jamie Powell at FT Alphaville has debunked the USA's claim to be the least protectionist trade area in the world. With the help of a couple of useful charts, he shows that it comes in a modest ninth on the list in trade-weighted terms. Go Jamie. The "victim America" narrative really needs to be stamped on, hard. America's trade deficit is not caused by mercantilist trade policies in other countries, it is an inevitable consequence of the dominance of the dollar - and is thus a measure of America's post-war success.

But in the course of debunking the USA, Jamie also incidentally debunked the Ultra Brexiters.

The Ultras insist that the EU is a bastion of protectionism, with extremely high tariff barriers to third countries. Indeed it does have very high tariffs for some products, mostly agricultural. But in the trade world, fallacies of composition abound. It is not safe to allege that a country or a trade bloc is extremely protectionist simply because it has high tariffs on a few products.

Jamie's charts show that the Ultras are very wrong. The EU's average tariff is low by international standards on both bound and trade-weighted measures. In fact it is lower than the average tariff of some of the countries that the Legatum Institute, mouthpiece of the Ultras, says could be part of their post-Brexit free trade paradise. You couldn't make it up.

Jamie didn't write about this, though - it is just evident from the charts. So I've borrowed the charts.

Here's the first. It actually comes from Eurizon, who used it to justify their claim that the US is "by far the least protectionist nation in the world". Never mind the US, just look at the EU28: 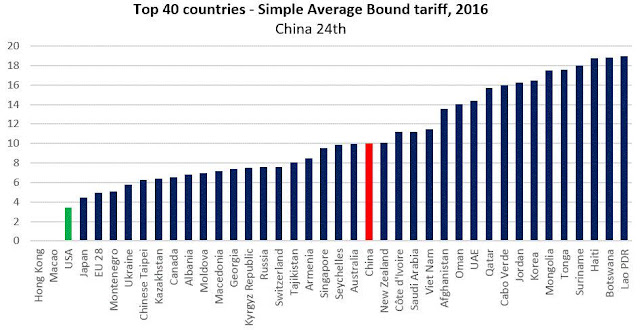 EU28 average bound tariff is among the lowest in the world. It is substantially below the bound tariffs of Australia, New Zealand and even Singapore, which the Ultras regard as a shining global example of unilateral free trade.

Of course, as Jamie points out, the bound tariff is a limit, not a target. The actual tariffs operating in practice are usually much lower. But it is interesting that the maximum average tariff that a "bastion of protectionism" will apply is only about half that of a "beacon of free trade" like Singapore, wouldn't you say?

But what about the actual tariffs? Surely the EU28 is far more protectionist in reality?

Here is Jamie's second chart. It shows the trade-weighted average tariffs in operation across the thirty countries and trade areas from the Eurizon chart, calculated from WTO data using applied tariffs (yes, the ones that operate in practice, not the bound tariffs) and trade volumes: 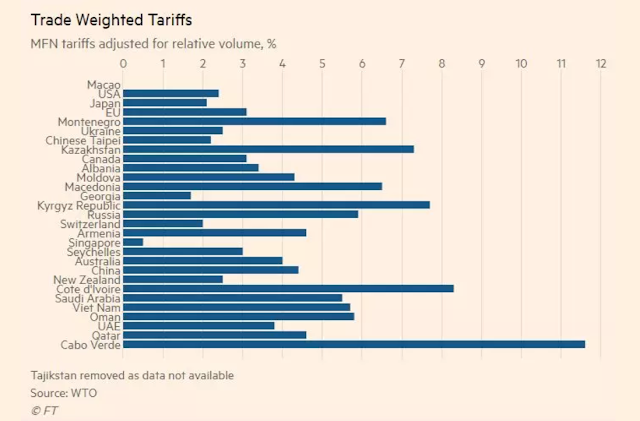 The EU28 has an average tariff of just over 3%, about the same as Canada and not far above the US's 2.5%. Protectionist? Not much.

Admittedly, this chart does show that Singapore's tariff barriers are in practice very low. The Ultras are right about that. But Australia's are significantly higher than the EU's, at 4%. And New Zealand's are not a lot lower than the EU's, at 2.5%.

The Ultras' dream of "like-minded countries" combining to create a free trade paradise appears to be a pipe dream. With the possible exception of Singapore - which is a city-state, not a country - nowhere on earth has genuinely free trade. The UK is not going to find trade any freer outside the EU than it does within it. Indeed, Jamie's charts show that most of the world is significantly more protectionist than the EU. This isn't a paradise, it's a shark pool.

Of course, as the image at the head of this post shows, tariffs are only one dimension of protectionism. Non-tariff barriers matter too, especially for a services-driven economy like the UK. The EU does have significant non-tariff barriers. But then so does every country. They arise from distinctive national characteristics such as law, language, educational qualifications, culture. In fact it is probably impossible to eliminate non-tariff barriers without seriously compromising national identity and self-determination. The Ultras need to decide what is really important to them - completely free trade, or sovereignty. They can't have both.

Charts from the Financial Times, obviously. Image from TES.