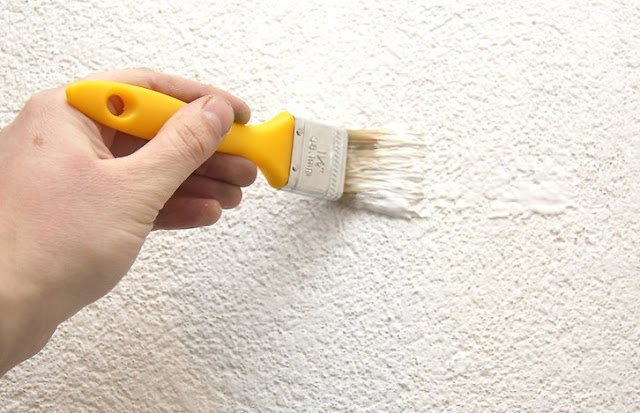 The Carillion whitewash has begun. Carillion's interim CEO, Keith Cochrane, is spinning the line that had banks not pulled funding, its collapse could have been averted. And the Financial Times has released details of a letter Carillion sent to the Government at the beginning of January, in which it asked for short-term advances to tide it over while it underwent restructuring. Labour MP Pat McFadden has written to the Treasury Secretary asking whether it would have been more cost-effective for the U.K. Government to support Carillion, rather than allowing it to collapse.

This looks to me like a campaign to deflect blame from Carillion's management to its lenders and customers. We are being led to believe that it wasn't insolvent, it was just illiquid, and depriving it of short-term funds caused a completely unnecessary collapse.

Of course, RBS is itself a past master at playing the "we're not insolvent, we are just illiquid" game. On the day that RBS failed, in September 2008, RBS's CEO, Fred Goodwin, insisted that the bank was solvent. "We don't have a capital problem," he said. "We have a liquidity problem. All we need is short-term cash".* But in fact, RBS was deeply insolvent. Rescuing it cost the U.K. Government £45bn, and RBS has lost a further £58bn since. Nearly ten years after the crisis, it is still in majority public ownership.

The similarity to RBS's collapse is striking. A couple of days after Carillion filed for compulsory liquidation, Carillion’s unsecured bonds were trading at only 2.4% of par: 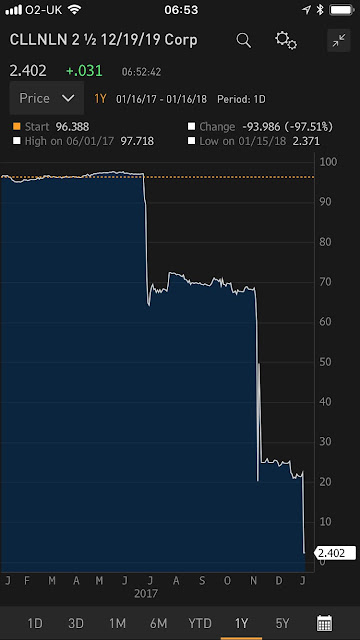 This is an extraordinary writedown. It implies that bondholders expect to get back almost none of their investment. And this is senior unsecured debt, not subordinated debt or equity. The holders of anything more junior have already been wiped.

As Carillion is in liquidation, paying bondholders means selling assets. What this chart tells us is that Carillion has almost no saleable assets.

Bondholders aren't the only creditors who stand to lose almost everything. In its 2016 full-year accounts, Carillion reported trade debts of £749.2 and (undefined) "other current creditors" of £760.5. Both of these had risen by nearly £200m since 2015. These debts are owed to Carillion's suppliers and subcontractors, many of which are SMEs or individual freelancers. Carillion had been flattering its cash flow by squeezing its small suppliers and subcontractors. Many have already waited up to four months to be paid, and now stand to receive almost nothing for work they have done and goods they have supplied.

No way was Carillion merely suffering a short-term liquidity crisis that it could have weathered if only banks and/or Government had coughed up, as Cochrane would like us to think. A company in liquidation whose creditors stand to lose almost all of their money is without question deeply insolvent.

Nevertheless, Carillion did have a severe liquidity problem. Despite squeezing its suppliers, it was desperately short of money. Cash flows on several major contracts were worse than expected, and disposing of some of its contracts raised less than it expected. Over the course of 2017, it borrowed more and more from banks to cover cash shortfalls - but this raised its debt service obligations, causing yet more cash flow strain. It aggressively bid for new contracts to bring in money to help it meet its obligations, undercutting its competition - but it then failed to complete contracts within time and budget, which worsened its cash flow and angered its customers. By the time it went into liquidation, it had only £29m of cash left.

Companies can and do fail because of severe cash flow problems, even if they are not insolvent. So if the company's financial position is otherwise sound, then providing short-term funding to ease a cash flow crisis is sensible. We could regard this as the non-bank equivalent of the "emergency liquidity assistance" (ELA) that the Bank of England extended to RBS and other banks after the fall of Lehman Brothers.

But Carillion was caught in a vicious downward spiral that could only be arrested by major deleveraging and a sizeable injection of capital. The letter seen by the FT suggests that Carillion management thought the company needed new capital of about £200m. But the depth of Carillion's insolvency suggests that this would have been nowhere near enough. So if the Government - or the banks - had provided short-term funding as Carillion requested, it would simply have delayed Carillion's eventual collapse.

Severe cash flow problems can also cause insolvency. Usually this is because companies are forced to sell assets at fire sale prices to meet current obligations. But in Carillion's case, the destruction of its asset base was not primarily due to asset sales. It was due to a catastrophic collapse in the value of Carillion's largest asset.

The largest item on the asset side of Carillion's balance sheet is "intangible assets". The notes to the 2016 accounts reveal that this consists almost entirely of "goodwill". At the end of 2016, goodwill was one third of Carillion's entire asset base. A further third was trade receivables, reflecting Carillion's critical dependence on cash income.

In accounting terms, "goodwill" is the difference between the net asset value of a company and the price paid by another company for its acquisition. It can be regarded as representing intangibles such as brands, patents, reputation, staff skills and customer loyalty. But in Carillion's case, it represented the projected net income streams from the subsidiaries, joint ventures and "special purpose companies" that ran the projects and delivered the services it was contracted to provide. As those income streams shrank, so did goodwill. Eventually, there was so little goodwill that Carillion's liabilities exceeded its assets. It became insolvent.

We don't know exactly when this happened, but it seems likely that it was somewhere between the end of 2016 and the first profit warning in June 2017. The goodwill asset was impaired in the 2017 interim accounts, but it quickly became apparent that the impairment was nowhere near enough. We don't yet have the 2017 full-year accounts, but we should expect to see goodwill written down to zero. Goodwill evaporates when a company is liquidated.

Carillion's most pressing problem was liquidity. Without that, it could not meet its obligations. But because the value of its assets depended on cash flows, its severe liquidity problem also destroyed its solvency. This is quite different from the insolvency of RBS. In RBS's case, the assets on its balance sheet became worthless because their market price fell. In Carillion's case, its principal asset was intrinsically worthless. The cash flows on which its value was estimated were simply projections. They did not exist in reality.

Furthermore, Carillion's balance sheet was highly leveraged and hugely risky. Its large debt pile far exceeded its equity, and was therefore effectively backed by assets whose value depended entirely on projections of future cash flows - projections that from June 2017 onwards, and possibly long before, were unrealistic. The 2017 restructuring plan reveals that Carillion had no coherent or credible solution to this structural problem.

Given all of this, I find it hard to blame the banks for pulling the plug. Short-term credit cannot heal deep structural insolvency. Sometimes, the kindest thing to do is allow a corporation to die.

But what about Government support? Carillion argued that it would be cheaper for Government to provide short-term support than to allow it to fail. The Government disputes this, of course – but it is already being asked to justify its decision on cost-effectiveness grounds. No doubt the National Audit Office will be asked to take a view at some point.

We have played this scene before, many times. No way would support for Carillion have been limited to some short-term funding and a few guarantees. Carillion was structurally insolvent and haemorrhaging money at an alarming rate. Any short-term money advanced by Government or banks would have gone straight down the drain. Eventually, Government would have been forced either to pull the plug itself or nationalise it. In my view, lending to it would have been a completely irresponsible use of public funds.

And so would nationalising it. We really don't need another RBS. Or British Leyland, for that matter. Much better to let it fold. But there could be a case for protecting the innocent who will be hurt by its failure. In particular, the SMEs and individuals who will lose both payment for the work they have done and, possibly, future work too. If Government wants to bail someone out, it should be these. Not Carillion, and not the banks and bondholders who lent to it, either.

The fact that Carillion managed to conceal its deepening insolvency right up to the point of failure is alarming. Worse, it was unnecessary. Carillion’s desperate financial position was evident in the 2017 interim accounts, released at the time of its second profit warning in September 2017. And there were also clear warning signs in the 2016 full-year accounts. Someone should have been paying attention. It is a national scandal that no-one was.