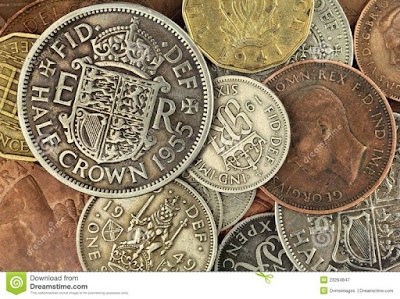 I wrote a piece on Forbes recently in which I described a bimetallic system of coinage and suggested how such a system might work - or rather, fail to work - for Bitcoin. These are the relevant paragraphs:


In a bimetallic system, there are effectively two currencies which are linked by a fixed exchange rate set by fiat. At the end of the 19th century - the time of Bryan's speech - Britain's copper penny was worth 1/144 of one pound. Other denominations of coin were created by multiplying up the penny: so the silver sixpence was unsurprisingly worth six copper pennies, and the silver shilling was worth twelve pennies, or 1/20 of a pound. All these relationships were fixed by fiat.

So, suppose that instead of using bitcoin as the medium of exchange, we use some other coin - let's call it "satoshi". We decide that this other coin is worth 1/100m of 1 bitcoin. Of course, in the Bitcoin system, there is no government "fiat": the nearest they have to this appears to be decisions made by developers, which are then validated by miners. It is democratic, sort of, though as the number of active miners is diminishing due to ever-rising costs, the claim to democracy is wearing distinctly thin. No matter. Developers can decide that the satoshi, not the bitcoin, shall be the medium of exchange, and set its value by fiat. Mankind shall not be crucified on a cross of Bitcoin.

This sounds like a solution. But it is not. Ultimately, it spells the rise of the satoshi and the demise of bitcoin. This is because Gresham's Law applies: people will spend satoshis and keep bitcoins. As economic activity increases, demand for the satoshi will rise, putting the fixed exchange rate under pressure. The satoshi will inevitably be devalued, probably several times. Eventually, the fixed link to bitcoin will be broken, and the value of bitcoin in satoshi will float.

Cue lots of Bitcoin experts popping up on Twitter to tell me I don't understand Bitcoin. This coin is different, apparently.

Their objections to my argument basically boiled down to three things:
I don't buy any of these.

Firstly, the "it's only a bit of a bitcoin" argument. That would hold if bitcoins, like gold, were made of something intrinsically distinctive. But they are not. They are bits on a computer. It is simple nonsense to say that one set of bits on a computer (which we have called a "satoshi") is "intrinsically" part of a larger set of bits on a computer (which we have called a "bitcoin"), but another set of bits (let's call it "ether") is not part of that larger set of bits. A bit is a bit. There is no intrinsic relationship between one bit and another bit. Whatever relationship there may be between them is created entirely by coding - which is a form of fiat. Anyone who has ever worked in machine code (as I did, very early on in my career) would know this. Sadly, despite dumping meaningful names in favour of long strings of numbers and confusing people by talking in hash-language, some of the geeks who dominate the crypto world don't seem to know how computers work.

My description of a satoshi as a new coin is every bit as accurate as theirs declaring satoshi to be a subdivision of bitcoin. It is merely a matter of perception.

The second objection says that my argument is wrong because I have valued satoshi in terms of bitcoin, when in fact the relationship is the other way round. Does this matter? No, it doesn't. The value relationship between two coins is the same whichever way round you quote it. In the example I gave in the Forbes post, a copper penny was worth 1/240 of a gold pound, and a silver shilling was worth 1/20 of a gold pound. Equally, a satoshi is 1/100m of a bitcoin. But I could also quote this the other way round: a gold pound was worth 240 copper pennies or 20 silver shillings, and a bitcoin is worth 100m satoshis. It makes no difference.

In 19th century Britain, most people would have valued pounds in terms of pennies or shillings, not the other way round, because the vast majority of transactions were in shillings or pence, not pounds. The pound was simply too valuable. This is also the case for Bitcoin. Transactions are in satoshi because bitcoins are too valuable to be practical, so it makes sense to quote the value of bitcoin in terms of satoshi. But the precedence does not change the relationship.

Alternatively - since my critics used gold as their example - I could say that 1g of gold is 1/1000 of 1kg of gold, or 1kg of gold is 1000 x 1g of gold. It is exactly the same relationship, just expressed differently.

And indeed it is - powerfully. Here is Bitcoin Wiki explaining how the satoshi came into being:


The value of a bitcoin in satoshi was decided by Satoshi Nakamoto to be 100 million no later than November 2008.

(For those who don't trust Wiki links, even Bitcoin ones, Satoshi's original code can be read here.)

So a trusted guru sets the value of one coin in terms of another. This guru then disappears and becomes an object of worship for his followers. Satoshi himself did not call the smaller coin "satoshi" - that name was established later in his honour. Surely a coin whose value is set by a god-like (but human) figure is the ultimate fiat currency? No wonder Bitcoin aficionados insist that the value of a satoshi in bitcoin terms (or vice versa) is fixed and immutable. It was set by the Lord Satoshi himself. Sometimes I think Bitcoin is more like a religion than a currency.

But a relationship that is set by fiat is not immutable. It can be extraordinarily difficult to change, of course: just try suggesting to a staunchly Hindu community that they could kill and eat a few of the sacred cows that are roaming their streets. They would rather starve. But this has nothing to do with logic or sense, and everything to do with ideology - or faith, if you prefer. So the Bitcoin community doesn't like the hard fork that would be necessary to change the relationship of satoshi to bitcoin. That doesn't mean it is impossible, any more than it was impossible to change the relationship of pennies to pounds. In 1970, the British government did exactly that. It "decimalised" the currency. The penny became 1/100 of a pound, and the shilling was eliminated along with other subdivisions of the old pound, such as the sixpence, the threepence and the half-crown. To this day, there remain a small minority of people who want "old money" back.

Someone told me that the software that runs Bitcoin could not cope with a change of relationship. This is nonsense too. It would need to be substantially amended, of course, but it is only code.  Don't let anyone ever tell you code is immutable. Code can always be changed.

Another genius had the nerve to say to me that the satoshi is the "atomic level" of bitcoin - which implies that there can be no further subdivision. This is more nonsense. Satoshis are sets of bits. Therefore they can be subdivided. Indeed, there have already been discussions about subdividing the satoshi, and the Lightning network could provide a means of doing so without a hard fork.

If a satoshi can be subdivided, it can be revalued. Indeed, we could say that if a subdivision becomes necessary, the satoshi will by definition be revalued, and will gradually go out of use just as bitcoin will. This is because of the deflationary nature of Bitcoin.

In an inflationary currency, it tends to be the smaller coins that go out of use, because they become impractical: the halfpenny was withdrawn from British coinage some time ago, and the penny and fivepenny coins are on their way out. Along with this goes debasement of the intrinsic nature of the coinage, because when the face value of the coins slips below the price of the metal needed to make them, the issuer loses money (seigniorage). So you won't find any actual gold, silver or copper in British coinage today. Those who want to store value tend to exchange coins for other assets, such as bars of gold, artwork, fine wines and property - and future claims on other people's assets, of course.

But in a deflationary currency, Gresham's Law applies - and the ultimate end of Gresham's Law is that "good" currency disappears from circulation, because it is hoarded to the point of complete illiquidity. Once you can't sell an asset, it becomes worthless. And like it or not, bits on a computer simply do not have the cross-cultural and historical value of gold. Bitcoin is a fiat currency. And as Bitcoin aficionados like to remind us, all fiat currencies eventually fail.