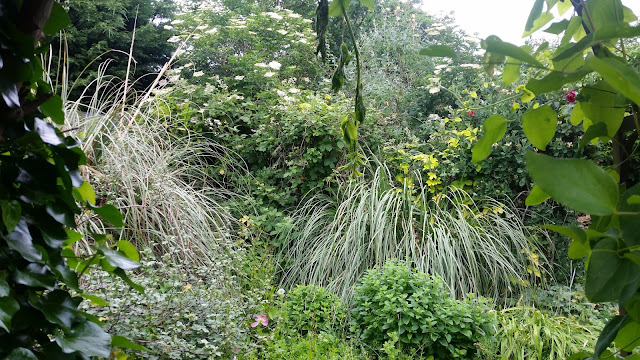 My mother, Joy Cooke, died last Wednesday, 24th May, at the age of eighty-seven. It was a peaceful end. Beautiful, in a way.

Mum had been ill for a long time. She had vascular dementia, triggered by an accidental morphine overdose after an orthopaedic operation in 2013. She also had COPD, brought on by a lifetime of smoking. For the first year of her slide into the oblivion of dementia, she was cared for by my father. But in August 2014, after she became doubly incontinent and both physically and mentally frail, he had to admit that her care was too much for him. She went into a nursing home that specialised in the care of those with dementia. There she remained until her death.

I wasn't there when she died. But I had been to see her earlier that day, along with my father and my youngest brother, Tim. She was very weak: though she reached out to each of us in turn to hold our hands, her grip was feeble. Sadly, she who had smiled so much during the last four years had lost her ability to smile.....Her head would fall to one side and her eyelids droop, then she would force her head up, open her eyes and reach for one of us again. It was as if she needed to know we were there.

I told her the names of those who were present, and added that my eldest brother, Simon, would be along later.

My father and I stayed for about half an hour, then I took him home, leaving Tim with my mother. Simon and his wife arrived about mid-afternoon and spent some time with my father before setting out for Mum's nursing home.

Mum passed away just after Simon and his wife arrived. It was as if she was waiting for them. Perhaps she had heard what I said.

There was no pain, no distress. She did not need the high dose of morphine prescribed for her to relieve the crisis of death. She just....stopped breathing. Death came quietly, and she went with him willingly.

This surely is how life should end, without fear or pain. When Death comes as a dearly beloved and long-awaited friend, it is beautiful, not just for the dying but for the living. For death brings hope, and the freedom to grieve.

Dementia is the cruellest of illnesses. It destroys the personality. The woman in the nursing home was not my mother. This strange new "Mum" was sweet, gentle, lovely.....she said little, but smiled at everyone. She was utterly charming, but not much like the clever, energetic, opinionated woman that I knew. It was as if my mother had died and been replaced by someone else, someone who did not know who I was, but who nevertheless greeted me with a huge smile and clung to my hand. I could not grieve for the mother I had lost, because there was this new, needy "Mum", whom I had to get to know.

For four years, my family has not really talked about our memories of Mum. How could we talk of the past, when she was still present but but tragically transformed? How could we grieve for her passing, when this strange new person was living in that nursing home? We were in limbo. Frozen. Numb.

Her death has sprung this trap of grief. Death came, not with a scythe but with a mithril sword, clearing the webs of horror in which we have been suspended, freeing our sleeping beauty from her prison. Now we are free to remember, and to grieve. The day after Mum's death, we talked for hours, sharing our memories of her. Death truly is a beautiful thing.

Strangely, we grieve now for two people - for the woman who died four years ago, and for the creature who replaced her. Dementia ends in a double bereavement, and a double grief.

And it also ends with dislocation. Even when Death comes as a friend, he leaves a trail of chaos. We had been waiting for four years for my mother's death, and yet when Death came, we were completely unprepared. It was as if, after years of appeals, we had been released from prison. Suddenly, we are free - but now what will we do?

Of course, there are things to do. A funeral to arrange. People to inform. Personal effects to dispose of. My mother was one of the most ecologically-friendly people that ever walked this earth, so the funeral is complicated, though organising a green burial now is considerably easier than it would have been thirty years ago when she first told me that was what she wanted. Green burials are fairly common now, but back then, no-one had ever heard of such a thing. "What do you mean, you want to be buried under a tree, with no coffin and no headstone?" Well, she will have a coffin, because they do biodegradable ones these days. But there will be no headstone, and her grave eventually will be marked only by the trees and plants around it. As was her wish, gardener that she was, her body will become compost.

But when all the organising is done, and we have laid her to rest in her quiet green grave, what then? Four years of winter is gone, and Spring returns, and with it, sorrow.


All suddenly the wind comes soft,
And Spring is here again;
And the hawthorn quickens with buds of green
And my heart with buds of pain.

My heart all Winter lay so numb,
The earth so dead and frore,
That I never thought the Spring would come,
Or my heart wake any more.

Life goes on, and so must we. And my forthright mother would not have it otherwise. "Go and dig the garden", she would say. Sow some seeds. Make new friends. Create something beautiful. Bring joy to someone's life.

As she did, during her lifetime. Mum brought joy to many people. To the old people at the Melvin Hall Day Centre in Penge that she ran for many years; to those who walked in the beautiful gardens she created; to her friends and family; and at the last, to the staff and residents of her nursing home. She truly lived up to her name. Joy, to the world.

Image at the head of this post is part of the garden that my mother created in Minster, Isle of Sheppey, photographed by me. The poem is by Rupert Brooke.

My mother spent many years developing and running services for the elderly. Her legacy sadly died before her, with the closure of Melvin Hall Day Centre in August 2016. But the need for services for the elderly is greater than ever. In her memory, therefore, we have set up a site where those who wish may make a donation to Age UK. The link is here: https://mydonate.bt.com/fundraisers/joycooke

Below is my mother's obituary notice, written by my eldest brother, Simon Cooke. 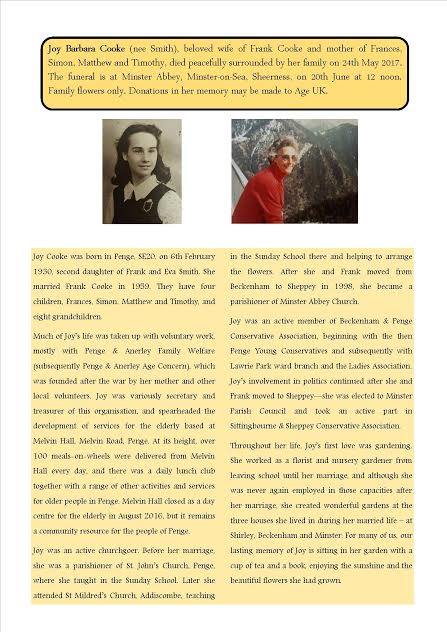