"Why have you changed your avatar?" asked a friend of mine.

Why indeed. Ever since I joined Twitter in 2010, my avatar has always been a picture of me, and my Twitter name has always been my own name. I've never wanted - or needed - to be anonymous.

The image on my avatar is the Anarchist Cat. Here is what Wikipedia has to say about it:


The black cat, also called the "wild cat" or "sabot-cat", usually with an arched back and with claws and teeth bared, is closely associated with anarchism, especially with anarcho-syndicalism. It was designed by Ralph Chaplin, who was a prominent figure in the Industrial Workers of the World (IWW). As its aggressive stance suggests, the cat is meant to suggest such ideas as wildcat strike actions, sabotage, and radical unionism.

A while ago, I added triple parentheses around my name in solidarity with the online Jewish community. Anti-Semitic elements on social media use triple parentheses to identify accounts they think are Jewish so that they can be targeted for hate attacks. I am not Jewish, but I have been the target of anti-Semitic abuse by people who (weirdly) decided I must be Jewish because I opposed their particular brand of racism. I know, first hand, how horrible it can be. So I added the triple parentheses to my own name in solidarity with the real Jews who suffer such hate attacks both online and in the real world.

And now I have added an image to my avatar in solidarity with another group. The people who are all too often called "traitors" for voting to Remain in the EU, and "saboteurs" for trying to overturn or water down the decision of 37% of the British population to leave the EU.

In the EU referendum last June, I voted to Remain - a traitorous act, according to some.  But after the vote, it quickly became apparent to me that only the hardest of hard Brexits would satisfy those who blame the EU, free trade and immigration for all their woes. I wrote about the need for a "nuclear Brexit" in the Financial Times last July. This was my conclusion:


It grieves me to say it, but the UK must now exit completely from the EU. Any form of mitigation simply dilutes the sovereignty for which the UK people voted. I know that cutting the ties completely is the most economically damaging approach, but in the end politics trumps economics. The UK’s democracy at home, and its standing abroad, are already seriously compromised. Attempting to evade or water down the decision of the people will only give a platform to the unpleasant face of nationalism, the hate-filled racism that is already beginning to show its face. For the sake of democracy and freedom, “nuclear Brexit” is the only remaining option.

But far from democracy and freedom being saved by the prospect of "nuclear Brexit", they seem to be under greater threat than ever. Headlines like these are markers along the path to an illiberal Britain: 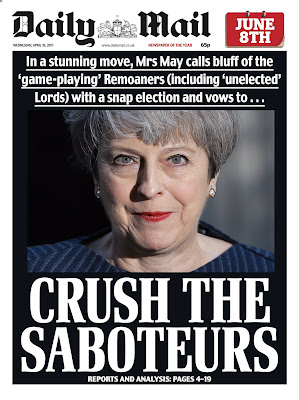 I do not agree with those who are trying to overturn the decision of the British people on 23rd June, 2017. I think that flawed though the referendum was, it was sufficiently definitive for the result to stand. But I defend completely their democratic right to oppose that decision and to try to get it reversed. And I am appalled by the violent rhetoric used against them. So just as I added triple parentheses to my name in solidarity with Jews who are the target of violent anti-Semitic abuse, so now I add the Sabot Cat to my avatar in solidarity with Remainers who are the target of violent rhetoric and outright threats.

And I have changed my mind about "nuclear Brexit". A very hard Brexit is exactly what the illiberal, authoritarian elements in British society want. I think a very hard Brexit is still inevitable, simply because no government will have the guts to disappoint those who voted to end freedom of movement. But if we continue down the present path, it won't just be the end of Britain's membership of the EU - it will be the end of Britain as a tolerant, liberal society.

This YouGov poll reported in the Independent shows what Leave voters want to see restored in post-Brexit Britain: 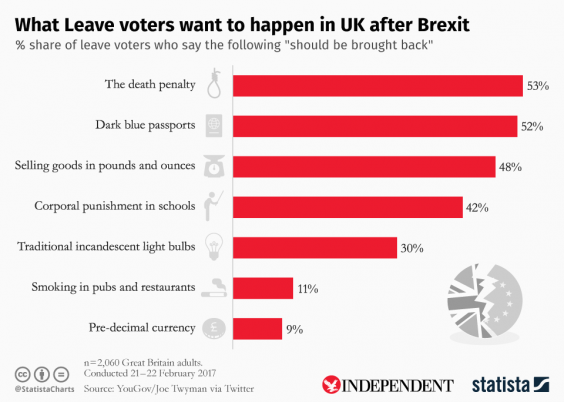 Nor is the illiberalism of Leave voters limited to hanging and flogging. This is the election manifesto from a Scottish UKIP wannabe councillor: 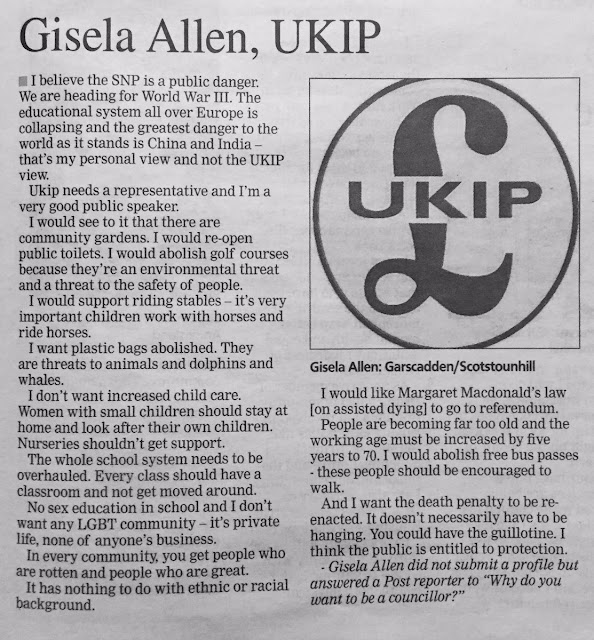 She seems to want to restore the Britain of a bygone age, when women with children didn't work, discussing sex was taboo, schools offered a very limited curriculum, and there was not much in the way of retirement provision or benefits for pensioners. Oh, and Britain had the death penalty, of course. In some places criminals were even executed by guillotine.

Her views are pretty extreme: few Leave voters that I have encountered would support raising the pension age to 70, eliminating free bus passes and helping the old to die. But lots of the Leave voters I have talked to seem keen on sending young people to work in the fields instead of going to university: young "snowflakes" need to find out what "real work" is, apparently, rather than drifting around Europe pretending to study. I have also seen significant support among Leave voters for ending tax credits, slashing benefits for sick and disabled, and stopping all support of families with children. And I have encountered a lot of opposition to free nursery care, extended maternity leave and paternity leave.

I suspect much of this arises from the fact that Leave voters are in general older people who are angry that younger people have benefits that they did not have.  But there also seems to be a genuinely reactionary and intolerant undercurrent.

YouGov calls this undercurrent "authoritarian populism", and says it is characterised by three core beliefs:
In Britain these three characteristics together frame an anti-EU position.

Authoritarian populist views are more common among older voters, with the hardest views among those over 60: 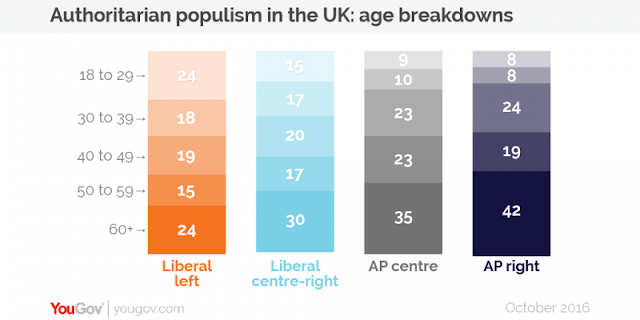 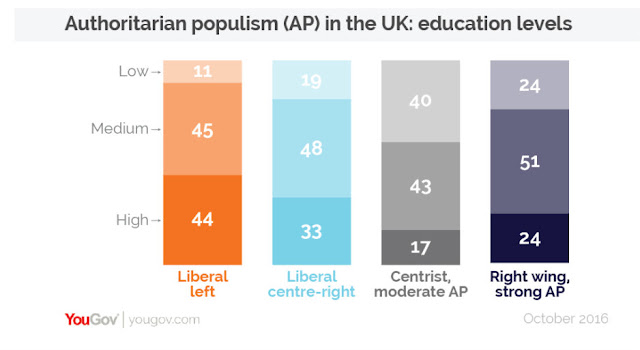 So, to sum up, older and less educated people are more likely to have illiberal views than younger and more highly educated people. The trouble is, there are a lot of them, and they vote. YouGov says 48% of British voters hold authoritarian populist views to a greater or lesser extent. Liberal-left voters remain the largest single group in Britain, but they are outgunned by the combined authoritarian-populist forces.

But why must we listen to such reactionary voices? Why should we give up so much of what we have achieved, simply to appease the angry, intolerant old?

The Britain that I love is an open, tolerant, liberal society that welcomes foreigners, promotes equality and is generous towards the less fortunate. If working to preserve those values makes me a "traitor" and a "saboteur", then that is what I shall be. And when the death penalty for treason is restored, I shall walk to the guillotine with pride.