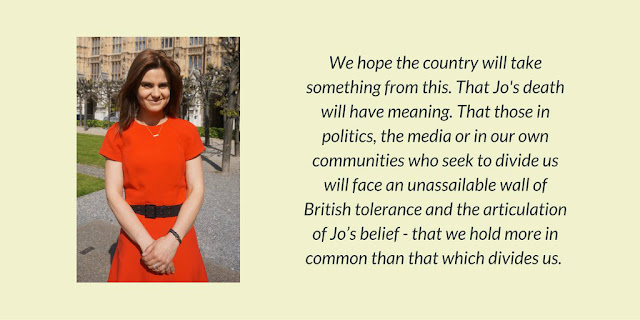 Treason is popular. As the tide of protectionism rises around the world, the concept has come back into vogue. If you believe in the right of all people, whatever their colour or creed, to seek life, liberty and happiness for themselves and their children, you are unpatriotic. I am one of many who have been labelled a "traitor" for voting Remain in the EU referendum. But I have got off lightly. The same label cost Jo Cox MP her life.

Jo was a fervent Remain supporter. She believed strongly that Britain would be better off as a member of the EU. As Thomas Mair shot and stabbed her in June 2016, shortly before the EU referendum, he shouted "This is for Britain”, “Keep Britain independent”, and “Britain First”. Political assassination? No. Execution. Treason used to be a capital offence, and Mair regarded Jo as a traitor because of her support for Remain. To him, killing Jo was an act of patriotism.

Patriotism is taking an ugly turn. We wear poppies on Armistice Day, honour those who have died in war and vow never to forget their sacrifice. But we are forgetting what their sacrifice was for.  As the two dreadful wars of the 20th century fade from living memory, the laying of wreaths and the Last Post are becoming merely empty rituals, while "patriotism" is hijacked by those who promote a creed of selfishness and brutality. The Union Jack, our symbol of unity, is adopted as their logo by groups intent on setting people of different faiths and colours against each other. Sometimes it is even displayed alongside the swastika as if we had never fought a war to end the evil of Nazism.

Christianity, too, has been forced into the service of this new patriotism. These words of Jesus feature on the website of the far-right political party Britain First (no, I'm not going to provide a link):

Britain First describes itself as a "patriotic political party and street defence movement.". It is ferociously anti-immigration and has an official policy of banning Islam in the UK. Its leader famously refused to accept the election of a Muslim as London Mayor, turning his back on Sadiq Khan as he gave his acceptance speech. Shortly afterwards, it announced a campaign of "direct action" against Khan and other Muslims in elected office, saying that they would be treated as "occupiers".

For me, as a Christian, to see the words of Jesus used to justify such hatred is painful beyond belief. The Jesus I know from the Gospels famously engaged with people of despised races and faiths, to the horror of the religious establishment of his time. "We will restore Christianity as the bedrock and foundation of our national life as it has been for the last one thousand years," says the party's mission statement. No thanks. I would rather Christianity died out than such a hideous distortion become the bedrock and foundation of my country's national life.

Of course, Britain First is hardly a mainstream political party. But the hatred it spews has echoes in the UK Independence Party and even among some members of the Conservative Party. They may not express their hatred in such extreme terms, but the underlying beliefs are the same: Britain for the British, keep the foreigners out - or if we must let them in, make sure they understand they are only here under sufferance. This is a narrow-minded, borderline racist definition of "British" that denies the diversity and tolerance that is the hallmark of our open, liberal society. And it is deliberately spread by the right-wing press.

Thomas Mair's action was extreme. But the words he used came from the Daily Express, the Daily Mail, the Sun. They are the words of those who self-identify as "patriots", wave the Union Jack and call for the borders to be closed, immigrants sent "home" (even if they have lived in this country for many years), and refugees rejected.

True, the vast majority of those who describe those who disagree with their "patriotism" as "traitors" would never dream of murdering anyone. But their words incite others who have no such inhibitions. History tells us that the support of the many makes possible the violence of the few: even genocide is popular. The violent murder of Jo Cox was the misbegotten child of the verbal violence of the mass media and the right-wing "patriotic" political parties. The poison spreads, and where it takes root, it brings death.

Thomas Mair was sentenced to life imprisonment without parole for murdering Jo Cox. The judge's remarks should give us all pause for thought:


You affect to be a patriot. The words you uttered repeatedly when you killed her give lip service to that concept. Those sentiments can be legitimate and can have resonance but in your mouth, allied to your actions, they are tainted and made toxic.

It is clear from your internet and other researches that your inspiration is not love of country or your fellow citizens, it is an admiration for Nazism, and similar anti democratic white supremacist creeds where democracy and political persuasion are supplanted by violence towards and intimidation of opponents and those who, in whatever ways, are thought to be different and, for that reason, open to persecution.

Our parents’ generation made huge sacrifices to defeat those ideas and values in the Second World War. What you did, and your admiration for those views which informed your crime, betrays the sacrifices of that generation.

You are no patriot. By your actions you have betrayed the quintessence of our country, its adherence to parliamentary democracy.

Our liberal democracy is founded on the right to hold and express minority views without fear and to seek to change the opinion of the majority. And our Christian heritage, at its best, teaches concern for the poor, help for the downtrodden and a warm welcome to the stranger in our midst.

True patriots, like Jo Cox, defend the rights of minorities and promote the social values derived from our Christian heritage. The real traitors are those self-proclaimed "patriots" who seek to stifle opposition, create division and sow the seeds of violence.