By Frances Coppola - May 24, 2016
It's not going to come from people working more. Excerpt from the IMF's latest Debt Sustainability Analysis for Greece, just released: 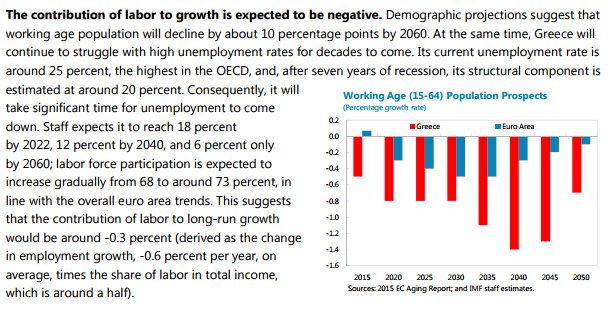 Oh dear. Quite apart from the negative contribution to growth, the prospect of unemployment taking 44 years to return to something approaching normality is simply appalling for Greece's population. I've looked in more detail at this here (Forbes). 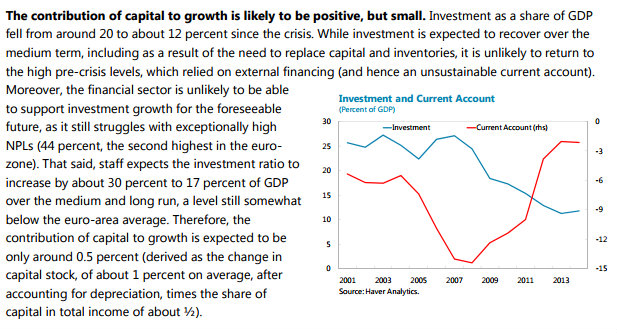 Yeah, about that financial sector.....Greek banks are still in crisis, it seems. The IMF thinks they will need another 10bn Euros on top of the 43bn they have already received, and even with this, they aren't going to lend. And they aren't worth anything, so can't even be sold to raise money. Greek banks are zombies, and like all zombies, they drain the lifeblood of their victims. They are a serious obstacle to Greek economic recovery. 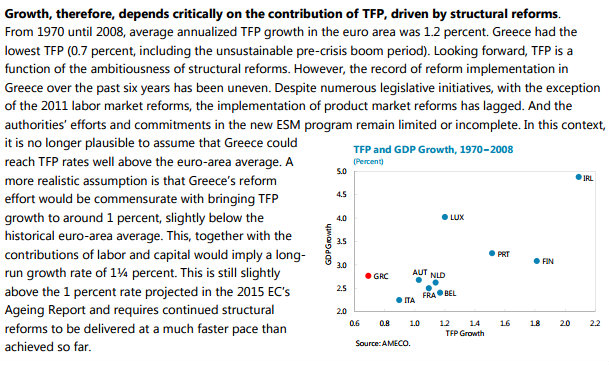 So the IMF doesn't believe Greece can deliver the pace of structural reforms that would be needed to deliver TFP growth much above 1 percent. No-one should be surprised by this. The remarkable thing is that anyone ever thought it could.

And that means that the outlook is poor - for the foreseeable future. A long-run growth rate of 1.25 percent - or more likely less - in an economy that has shrunk by 27 percent in the last seven years, means that Greece effectively faces decades of depression.

Whatever fiscal sins successive Greek governments may have committed, I find it hard to believe that the Greek people deserve such hardship.

Debt Sustainability Analysis, Greece, May 2016 - IMF
IMF predicts unemployment in Greece will fall to 12 percent...by 2040 - Forbes
The Economic Consequences of the Eurozone - Forbes
Morality in the Greek crisis