By Frances Coppola - August 22, 2015
The Co-Op Bank has revealed its 2015 half-year results. And they are not pleasant reading. It has made a statutory loss before taxation of £204m, considerably worse than the £77m loss reported in the 2014 half-year accounts. And the Board advises that the bank will not return to profit for another couple of years.

The background to this horrible report is the Bank of England's stress tests last autumn. I didn't bother to look at the results at the time, since it was always obvious that the Co-Op Bank was not going to pass the tests. They came too soon for it to have made serious improvements to its balance sheet after its near-collapse and traumatic recapitalisation in 2013. But I should have looked. The stress test failure was far worse than I had realised:

The table shows that the adverse stress scenario, which modelled a severe property market crash, completely wiped out the Co-Op Bank's capital, leaving it insolvent. This is a major failure. Really, the Co-Op Bank should have been closed down. It is only still alive because the PRA agreed to its capital-raising plan:

The Co-Op Bank is now a ward of the PRA. Its continued existence depends on successful completion of the plan agreed with the PRA. This is why the PRA recently decided not to impose a richly-deserved penalty of £121m. The Co-Op Bank is already hanging on by its fingernails. Imposing that penalty would amount to stamping on its fingers.

The principal components of the £204m loss just reported arise from the scale and pace of the capital plan.  The Co-Op Bank has taken £38.2m losses on Non-Core asset sales, of which a significant proportion comes from the recent securitisation of £1.5bn of Optimum mortgage assets. The Co-Op is trying to dispose of its Optimum portfolio of subprime residential mortgage loans as quickly as possible, since it significantly adds to balance sheet risk and eats capital. But although it has reduced the Co-Op Bank's risk-weighted assets and therefore improved its capital position, the securitisation was not entirely successful, since the bank has had to retain 65% of the senior tranches. Hanging on to senior tranches of subprime securitisations is not the wisest move for a distressed bank, so I assume this was because of lack of buyers. These Class A notes are now held as "available for sale". Anyone fancy a flutter?

Unwinding over-optimistic fair value adjustments from the Britannia Building Society acquisition in 2010 cost the bank another £54m, The remainder of the loss arose from increased expenditure on restructuring, including IT system replacement: this suggests cost over-runs, but it may simply be due to the PRA's insistence on a faster pace of change.

The counterpart to the loss is the capital gain. Largely because of the securitisation, the Co-Op's Core Equity Tier 1 capital ratio (CET1) has improved to 14.9%. But this is only temporary. Because there are further losses to come, the CET1 ratio is set to fall again, and remain below the PRA's required level for the Co-Op Bank (its "individual capital guidance" level) for some time to come. In other words, the Co-Op Bank is still in regulatory insolvency, two years after its initial collapse and restructuring, though admittedly this is principally because the regulator has moved the goal posts. Unsurprisingly, the report focuses far more on the measures the bank is taking to improve its capital than on the headline losses.

But the fact is that the Co-Op Bank has a simply enormous mountain to climb. It is still haemorrhaging depositors, though at a much slower rate. Its credit rating remains on the floor, making its cost of funding uncompetitive compared to other banks. Its costs are far too high, despite recent rationalisation of its branch network. And its balance sheet is highly risky. For example. 26% of core retail secured lending and the majority of the Optimum portfolio is interest-only (though this is less than in 2014): 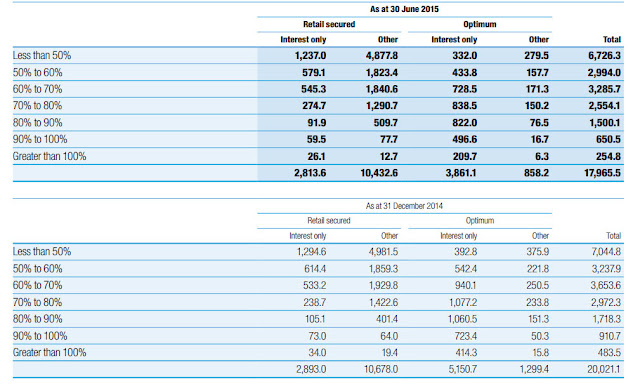 Not only does the bank have business risks, it has operational ones too. The report notes:


across the Bank's IT infrastructure there are varying levels of resilience and recoverability and whilst a basic level of resilience to technical component failure is in place, the Bank does not have a proven end-to-end capability to recover from a significant and prolonged data centre outage.

The FCA has formally notified the Co-Op Bank that this is a breach of its Threshold Conditions - which means the bank does not have adequate resources to be in the business of banking. This is further justification for closing it down, since lack of IT resilience is even more risky for customers than lack of capital. But once again, the Co-Op Bank has been reprieved. The IT systems are being replaced, though this is a high-risk project which will take some time to complete.

I am wondering how many more reprieves the Co-Op Bank will be given. The regulators are astonishingly generous to it, considering the scale and nature of its problems. It is the most damaged bank in Britain by a long way. I suspect that, were it not for an exceptionally loyal customer base - which it does not deserve - and a crucial role as clearing bank for a significant proportion of the UK's small building societies and credit unions, it would have been wound up long ago.

But the whole capital project is high risk. The bank admits that it is not at all sure the plan will work:


The Bank’s plan to focus on becoming a smaller Core Bank is unproven and is in the early stages of implementation. The Bank does not have a track record in successful execution of the large scale change necessary.

And it identifies the following  specific risks (my emphasis):
The Risk Management section tries to explain what the bank is doing to manage them. But some risks just are not manageable. Point 2 bluntly states that the Co-Op Bank might not remain in business. The plan faces considerable headwinds and slippage seems distinctly likely. If, as a result of this, PRA orders the bank to raise more capital and it is unable to do so, it is dead.

This has been noticed by the bank's auditors: 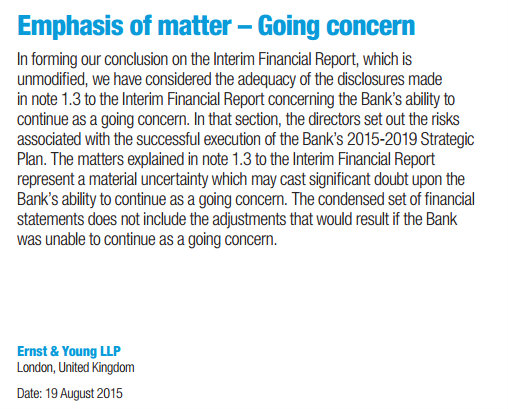 Oh dear. The last time there was a statement from the auditors that cast doubt on the Bank's ability to remain in business was in the 2013 interim results. And we all know what happened next.

So what is the way forward? Well, the Co-Op has raised £250m of additional capital. And there is talk of the Co-Op Group selling its remaining 20% stake: this might be a welcome relief to the Co-Op Group, which is itself still in intensive care after a major restructuring. There seems little doubt that selling is the Co-Op Group's eventual intention, since it has for the last two years listed the Co-Op Bank under "discontinued operations" in its annual reports. But the question is the timing, and the implications. The Co-Op Group is not going to get a good price for its stake at present, given the uncertain future of the bank. And once the Co-Op Group no longer had any interest in the bank, how much longer would the Secretary of State allow the bank to keep its name?

An IPO has also been discussed. But despite the cautious optimism expressed by its Chief Executive Niall Booker, I can't see how Co-Op Bank can have a future as a small independent retail bank. The extent of change is just too great and the risks too high. I suspect that the real purpose of the capital plan is to dress it up for sale. Indeed the FT reports that Booker has already mentioned the possibility of merger with another bank:


The chief executive added the bank could take part in the consolidation of smaller banks through a potential merger. “We’ve always said that we think there will be some consolidation in the challenger market. We talk to people from time to time,” he said.

In a particularly poignant twist, this would place the Co-Op Bank on the same footing as TSB, the Lloyds Bank carve-out it had hoped to buy, which has just been sold to Banc Sabadell.

But sale to another bank would mean the ignominious end of a venerable institution, and the demise of the hopes of those who wanted to return it to cooperative ownership.