The Battle of the Drafts

Greece's battle with the Eurogroup over its debt and bailout terms is heating up. And both sides have deployed a new and powerful weapon. The draft communique.

It all started with the draft communique presented to the Eurogroup finance ministers meeting by Jeroen Dijsselbloem. This was leaked to the press by the Greek delegation, complete with angry annotations, before the meeting even started. When the Greeks rejected it, therefore, the press already knew both the contents of the communique and the reasons for its rejection. Round 1 to the Greeks.

And Round 2, as well. After the meeting, Yanis Varoufakis held a press conference in which he complained that the draft presented to the meeting was not the draft he had discussed with the European Commission's Pierre Moscovici, which he said he had been "happy to sign". A draft purporting to be the "Moscovici draft" was duly leaked to Channel 4's Paul Mason. Unsurprisingly, it contains none of the commitments to the "current programme" of the earlier leaked draft, except in the context of transition to a "new arrangement".

But the Eurogroup was not going to let the Greek delegation win this battle. Later that night, the "right" version of the "Moscovici draft" was also leaked to the press. This was welcomed by various commentators as being "pro-Greek", because it acknowledged Greece's concerns about social cohesion and the humanitarian crisis. But as I pointed out here, it also locked Greece into the current programme without relief: all it offered was a possible softening of imminent targets, which would have to be made up by harsher austerity later. It was, in reality, a combination of the "Moscovici draft" and the "Dijsselbloem draft".

The release of this third draft was accompanied by lots of complaints about the Greeks' failure to produce a draft of their own. If the measure of success was the number of drafts produced, the Eurogroup was winning three-nil. "Over to you, Greece", ran the headlines. Round 3 to the Eurogroup.

This didn't go unnoticed in the Greek camp. Drafts, pah. They came up with an offer. The trouble was, the press didn't understand the offer. It was in Greek. The FT reported that Greece would seek "an extension of its international bailout". This would be a major climb-down by the Greek government, which has insisted that the bailout program will not be extended (and was elected on this basis). Once again, people were left scratching their heads. Why would they give in now?

The ever-helpful Yannis Koutsomitis contributed the following Google translation of the Greek offer: 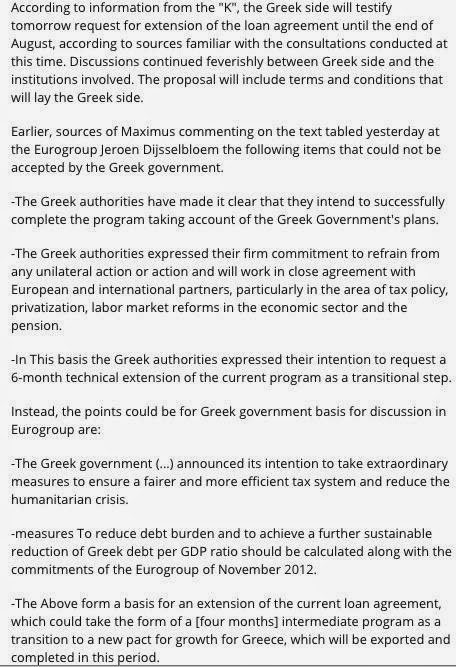 The rejected items are from the "Dijsselbloem draft". Greece has refused to agree to complete the current programme, refrain from unilateral action or cooperate with "European and international partners" (which is code for the Troika, of course) on fiscal policy and structural reforms. That was always its stance: there has been no "climb-down".


Measures for reducing the debt burden and achieving a further credible and sustainable reduction of the Greek debt-to-GDP ratio should be considered in line with the commitment of the Eurogroup in November 2014.

But the Greek delegation appears to have taken advantage of the language difference to make a subtle alteration:


Measures to reduce the debt burden and achieve a further sustainable reduction of the Greek debt to GDP ratio should be calculated along with the commitments of the Eurogroup of November 2012.

This does rather change the meaning, doesn't it?

And the paper battle continues. The Greek government has now released to the press the presentations and associated "technical documentation" provided to the Eurogroup. Reports from Eurogroup sources that the Greek delegation made no credible offer seem to have been "economical with the truth", to put it mildly. According to Kathimerini (Google translation, original Greek here):

It shows that Mr. Varoufakis accepted the extension of the loan agreement, but not the program, while reference was made and the commitments it undertook to bring out the government during the "bridge program" proposed for the next 3-6 months. These are:
- Reduction of bureaucracy. Documents produced by the public administration should be presented to citizens.
- Strengthen the independence of tax administration.
- Creating an efficient and fair system of tax litigation matters.
- Modernization of bankruptcy law.
- Reform of the judicial system.
- Developing a competitive and healthy environment in broadcasting that enhances the transparency and tax revenue.
- Dissolution of various cartels.

And from Mr. Varoufakis's presentation to the Eurogroup on Monday:

"To sum up, our government is ready and willing to apply for an extension of the loan agreement by the end of August (or until whenever the Eurogroup judge), to agree on a set of reasonable conditions to be fulfilled in this period and commit in making a complete evaluation by the European Commission at the end of the interim period. A period which will allow Greece and its partners to create a new contract for the development of Greece".

And it is also now clear where the battleground is. Both sides seem to have taken to heart Bulwer-Lytton's famous adage, "Beneath the rule of men entirely great, the pen is mightier than the sword". No longer simply spectators, journalists have become part of the game. I wonder how the world's press will react to being used as a weapon?

UPDATE. Via @WEAYL on twitter, the full set of Eurogroup documentation released to Kathimerini is here. It includes Yanis Varoufakis's presentations to the Eurogroup meetings on 11th and 16th February, with associated technical documentation, plus the Dijsselbloem and second Moscovici draft communiques. Looking at this, it is very hard to argue that the Athens government has not been specific about its plans, or that its plans are unreasonable. Round 4 to Syriza, I think.

The two words dividing Greece and the Eurogroup - Pieria

Eurogroup: battle of the drafts - Asteris (storify)
A very good collection of tweets and links exposing the Eurogroup's bait & switch con on Monday. And a great title. Thanks.