By Frances Coppola - February 14, 2015
From the OECD comes this chart showing which countries have done the most since 2007 to reform their economies: (h/t London Analyst): 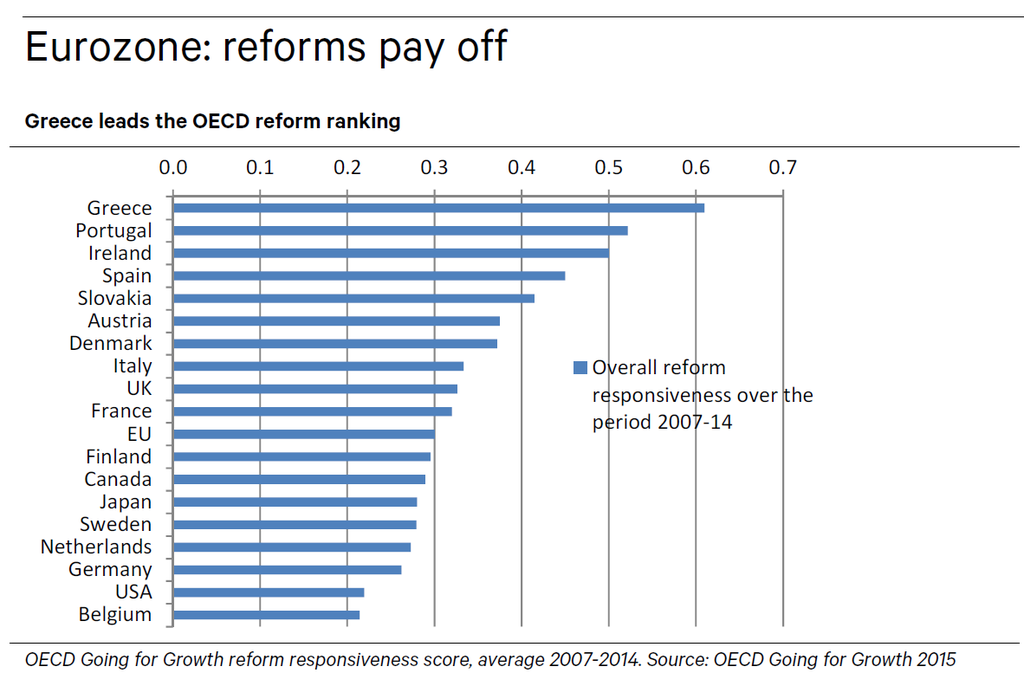 Isn't this marvellous? All those who say Greece hasn't done any reforms now have egg on their faces. Greece deserves hearty congratulations for its reform effort.

And as the headline says, all those reforms are paying off, aren't they?

From the OECD's Economic Outlook dataset for November 2014, here is the GDP growth of the five best reformers since 2007: 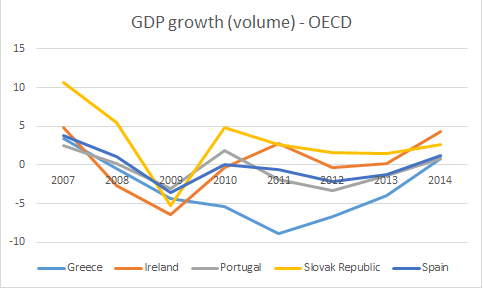 And here's the GDP growth of the five countries that have done the least reform since 2007: 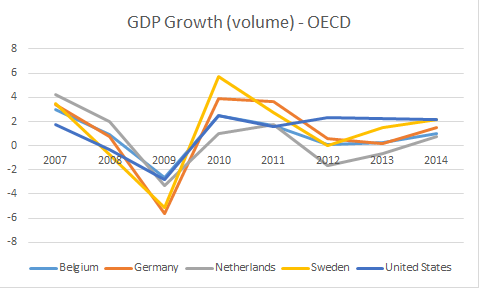 Since the GDP growth in 9 of the 10 countries is actually lower in 2014 than it was in 2007, and the tenth country (the USA) has made no significant reforms, it is not evident from these charts that "reform" makes any difference at all.

Ah, you say, but that is because we have not allowed reforms long enough to work.....

But Germany made painful reforms in the early 2000s. Surely a decade is long enough for reforms to be bearing fruit? Yet its GDP growth is worse than the USA.

And if you happen to live in Slovakia, you could be forgiven for believing that "reform" makes you substantially poorer.

But actually this set of results has something much more interesting to tell us. I've removed the USA and Sweden from the following chart, and added Finland, so it shows only the best and worst Eurozone reformers. (I've also removed Slovakia from this chart because it is an outlier in this dataset due to the omission of other East European countries.) 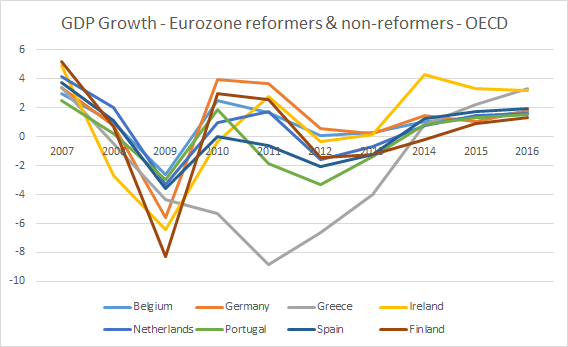 The bounce back of non-reforming countries from the 2008-9 crisis was short-lived. Finland, Germany, Belgium and the Netherlands all suffered a sharp drop in GDP growth in the Eurozone crisis. In short, their GDP growth both before and after the crisis was unsustainable.

It is hard not to conclude that the bounce back of non-reforming countries after the 2008 crisis was achieved at the expense of their weaker Eurozone partners, who were unable to bear the burden. When they collapsed, what was in effect an aftershock from the 2008 crisis transmitted itself back to the non-reforming countries, who were then forced to absorb what they had tried to avoid. Understandably, they were angry. And still are. Hence the stony refusal by these countries to consider proposals for a gentler approach to reform.

It is not clear to me why countries whose GDP growth is on an unsustainable path and vulnerable to external shocks should be excused reform. Though GDP growth for these countries appears to be converging on to a lower path: it seems the "reforms" of weaker countries are forcing stronger ones to temper their expectations.

However, this is not as good as it appears. Because stronger countries have learned no lessons, they seem intent on continuing their beggar-my-neighbour policies outside the Eurozone. And their lower GDP growth expectations don't encourage intra-Eurozone trade to develop. This is not viable. The future of the Eurozone depends on stronger intra-Eurozone trade and a more cooperative approach.

The non-reforming countries need to reconsider their position. The enormous trade surpluses of Germany and the Netherlands are nothing to be proud of: the corollary to them is poor domestic investment, as this chart for Germany shows (h/t Schuldensuehner): 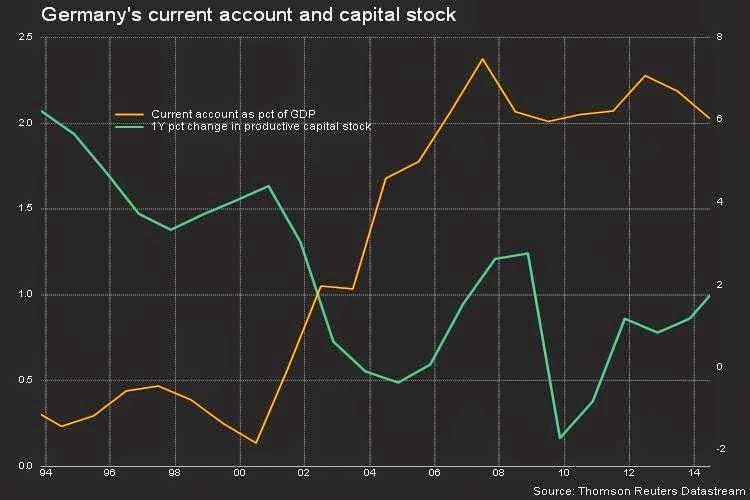 The reforming countries have made deep and painful cuts to domestic consumption - hence their recessionary economies - and rebalanced towards exports. Now it is time for the non-reformers to reform. They must increase domestic investment and raise consumption. Without that, the weaker countries cannot recover. And without recovery for the weaker countries, the Eurozone is doomed.

It is as simple as that.