Liquidity hoarding and the end of QE 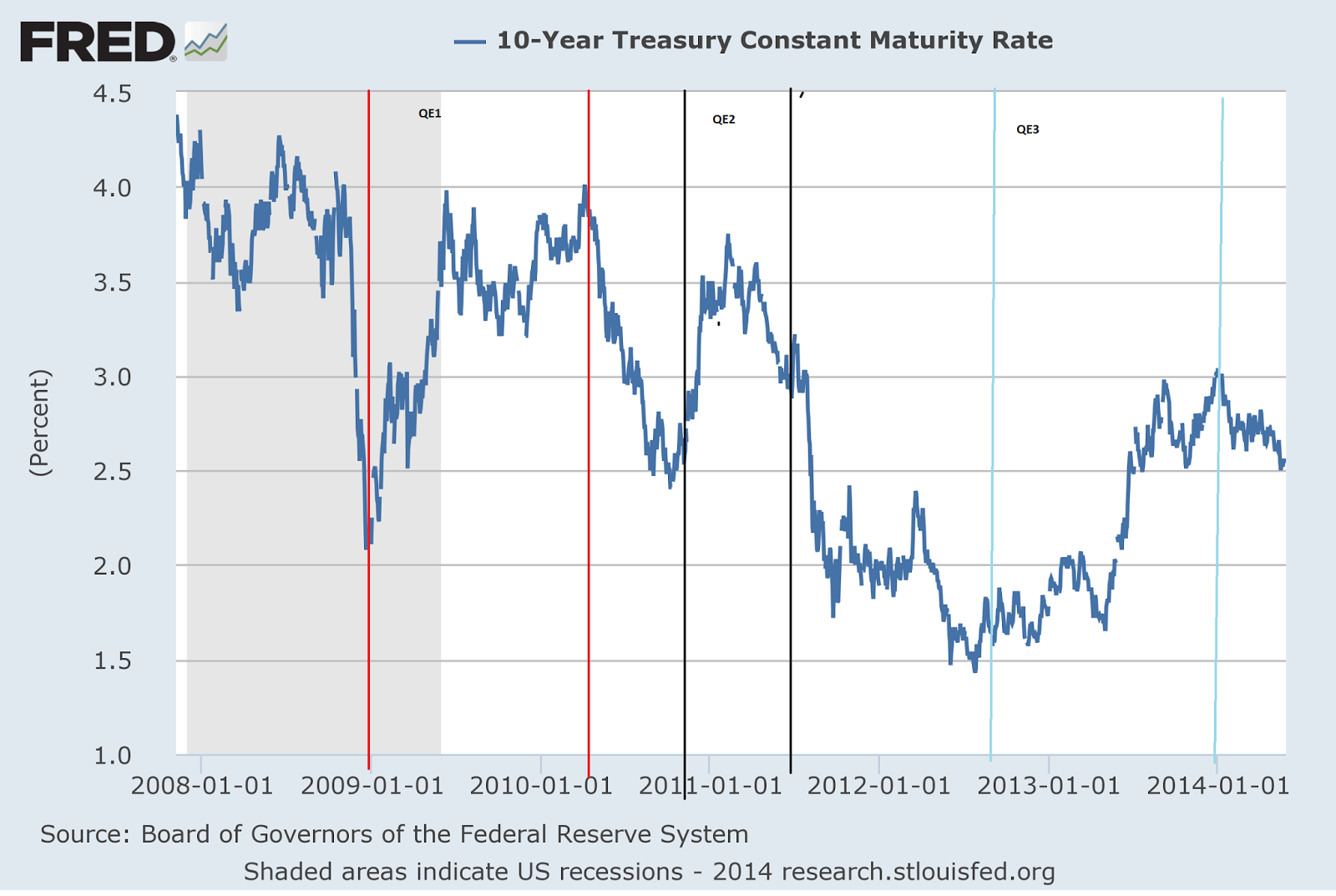 (lines and QE annotations mine)

Every time QE is announced, yields rise: when it ends, they fall. And no, this doesn't just affect the 10-year yield. The same basic shape can be observed on just about any maturity over 1 year (short-term rates are propped up by the positive IOER policy).

I've written about this before, and concluded on that occasion that the rise in yields was due to the closed-end nature of previous rounds of QE bringing forward sales that would not otherwise have happened and encouraging carry capture strategies due to raised inflation expectations. I expected therefore that if QE was continued for long enough, or announced in a way that indicated no definite end, yields would fall as expected rather than rising. But it seems this is not the case. The current round of QE was announced in September 2012 with no end date for purchases. But yields started to rise soon after it was announced: admittedly they rose more gradually than in previous rounds, but rise they did. And they continued to rise until December 2013, when the Fed announced its taper. Since then, yields have been falling.

Now of course there may be all manner of explanations for this. Correlation doesn't indicate causation, ceteris is not necessarily paribus, and all that. Deutsche Bank came up with eleven reasons for falling US Treasury yields, none of which mentioned the taper, and David Ader of CRT Capital Group produced another eleven that didn't mention it either. And I am sure there are plenty more reasons that don't include tapering.

But I have a theory. I think it IS at least partly due to the taper. And the reason is the effect that QE has on global liquidity.

QE increases liquidity in the financial system, or rather in the regulated part of it*, by buying assets that carry some form of risk - usually duration risk and interest rate risk. This has the effect of moving risk from the financial system to the central bank's balance sheet. The consequence of this is that the financial system is absolutely awash with the safest form of safe asset, namely cash, and rather short of slightly more risky cash substitutes. Those who want safety have no reason to buy longer-dated treasuries when there is so much cash around, while those who want yield will still prefer riskier assets. Rather than depressing yields on longer-dated treasuries, therefore, QE actually raises them as investors substitute cash for treasuries**.

When QE stops, whether suddenly or gradually, there is of course no immediate withdrawal of liquidity. But the sudden removal of the INCREASE in liquidity gives the impression of a drought. It's like someone washing their hands under a running tap instead of in the sink: when that tap is suddenly turned off, or the flow through it is restricted, the washer thinks they have run out of water, even though there is an entire sink full because of the previous flow. This is what is happening in financial markets. The Fed is turning off the QE tap.

A year ago, when Bernanke first announced that the Fed intended to end QE, markets thought the tap would suddenly be turned off. And they panicked. So that's not how the Fed is doing it. They are turning off the tap very, very slowly, giving lots of time for market participants to find other ways of managing liquidity. And, prodded by regulators, market participants are doing so. They are building up substantial liquidity reserves in the form of safe liquid assets. This is happening across all types of market players: governments, especially EMs, are building up FX reserves; corporates are building up cash and near-cash holdings on their balance sheets: banks are vastly increasing their liquidity buffers; and asset managers are increasing their safe asset holdings to give them collateral so they can meet day-to-day liquidity needs, for example for cash margin calls on derivatives traded through central clearing houses.

To be sure, all of these players have been building up liquidity reserves for quite a while - in some cases, since well before the financial crisis. But the withdrawal of QE makes this need more acute.  As I explained here, the age of easy money is over, at least for the moment.

So market participants are increasing their purchases of safe assets in order to improve their liquidity. All classes of goverment bonds are involved: after all, if liquidity drought is the perceived risk, a future claim on Government cash that it is obliged to honour is valuable. As is anything that is guaranteed by government and readily tradeable for cash. It's worth remembering that for corporations, insured deposit accounts don't offer much in the way of safety because deposit insurance limits are too low: government bonds are nearly as liquid as an insured deposit account and benefit from an unlimited government guarantee. Corporations who wish to self-insure their own cash flows, therefore, will want to hold government bonds or equivalent safe assets as stores of liquidity. Banks, too, hold government bonds as liquidity buffers in addition to, or as substitutes for, reserves.

At the same time, we have capital rebounding back into Western safe assets from the troubled EM countries and a slowing China. And we have the beginnings of a slowdown in Germany, too. All of these combine to depress yields on USTs as fearful investors seek safety, fearful corporations and financial institutions hoard liquidity and the Fed continues its taper.

Government bonds are not the only safe assets whose price is being pushed up. Property, too, is rising in price. In Europe it is not the most liquid of assets, so the purchasers tend to be people looking for yield rather than liquidity hoarders. But in America, where the mortgage market is largely securitized, the price of MBS is soaring. Property itself may not be liquid, but its derivatives are.

If I am right that the cause of the current fall in safe asset yields is primarily liquidity hoarding due to the Fed taper, then eventually yields will reach equilibrium. But.....there is of course another explanation. Yields on safe assets have been falling for over thirty years: Could it be that all QE3 did was temporarily prop up yields, and now that it is being be removed, yields are simply reverting to their previous trend?

I'm sure this is what Larry Summers would say. Welcome to secular stagnation.


* QE can actually create a liquidity drought for non-banks who rely on the same safe assets as collateral for repo financing as the central bank is buying. This is partly why the Bank of England used a collateral swap, rather than more QE, to provide banks with cheap funding for lending: increasing the volume of T-bills in circulation and encouraging banks to use them in the repo markets eased the safe asset shortage and therefore made liquidity conditions easier for non-banks as well as banks.

** Just to remind you: yield is the inverse of price. If yields rise, prices fall.
QE