A tale of two reviews

By Frances Coppola - May 17, 2014
The last few weeks for the Co-Op could perhaps be called “a tale of two reviews”. Firstly, there was Sir Christopher Kelly’s report into the disastrous takeover of Britannia Building Society by the Co-Op Bank. Secondly, there was Lord Myners’ review of governance in the Co-Op Group.


Sir Christopher Kelly’s report tells a shocking story of deceit, corruption and utter incompetence in both the Co-Op and Britannia, both before and after the merger. The true state of Britannia’s balance sheet appears to have been deliberately concealed from those tasked with doing due diligence, and there were financial shenanigans designed to create the illusion of value when in reality value was being destroyed.  Britannia was by no means a sound business prior to the merger: it had extensive subprime mortgage exposure and a highly leveraged (and it now transpires, overvalued) commercial property book. But what I find more worrying is the evidence that AFTER the merger the enlarged Bank was not in control of its loan book. In the 2011 accounts, nearly a third of its loan portfolio was described as “unrated” for risk. Put bluntly, the Co-Op Bank under Neville Richardson had no idea what risks it was carrying on its balance sheet, let alone how to manage them.

Nor was this the only problem. The scale of compensation for PPI mis-selling at the Co-Op Bank is, proportionately to the size of its balance sheet, nearly as large as Lloyds Banking Group's. And the Co-Op Bank is the only bank to have been censured by the regulator for breaking the Consumer Credit Act by misleading people about the terms of their mortgages.

The failure of financial and risk management at the Co-Op Bank exposes a deeper malaise. What happened at the Bank was a failure of Co-Operative values. A bank that deceives its owners and mistreats its customers is not an ethical bank, however many ethical investments it makes. The Co-Operative Group lost control of its bank long before the hedge funds moved in.

Sir Christopher makes it clear in his report that attempts by Group Board members to evade responsibility for the Britannia merger and its consequences are unacceptable. “We didn’t know, we were kept in the dark” is no defence.  Admittedly, professional boards in other financial institutions have been equally incompetent: but that is no reason to excuse what happened here. It is a sad reflection on the state of the Co-Op Group Board that those responsible for the disastrous Britannia merger and the subsequent mismanagement of the Bank could so comprehensively deceive them, to the detriment of the Co-Operative businesses and members.

And this brings me to the Myners Review.

Lord Myners’ review goes far beyond the troubles of the Bank. It examines the state of the Co-Op Group as a whole. And for me, it made incredibly sad reading.  The Co-Op Group is a shadow of what it was when I was a child, when it was the market leader in retail and at the heart of the communities it served. Despite successive attempts at reform, it has failed to respond to the challenges of an increasingly competitive retail environment. It is in long, slow, possibly terminal, decline.

It is clear that the Co-Op Group must undergo radical reform if it is to survive, and I have no doubt that Myners’ recommendations were done with the best of intentions. But he presented his argument so badly that instead of bringing together co-operators and executives in a shared commitment to reform, he set people’s backs up and generated opposition and even outright hostility.

And yet I think he was on the right track.

The heart of the Co-Op Group is its values and principles (this table is from Myners' report): 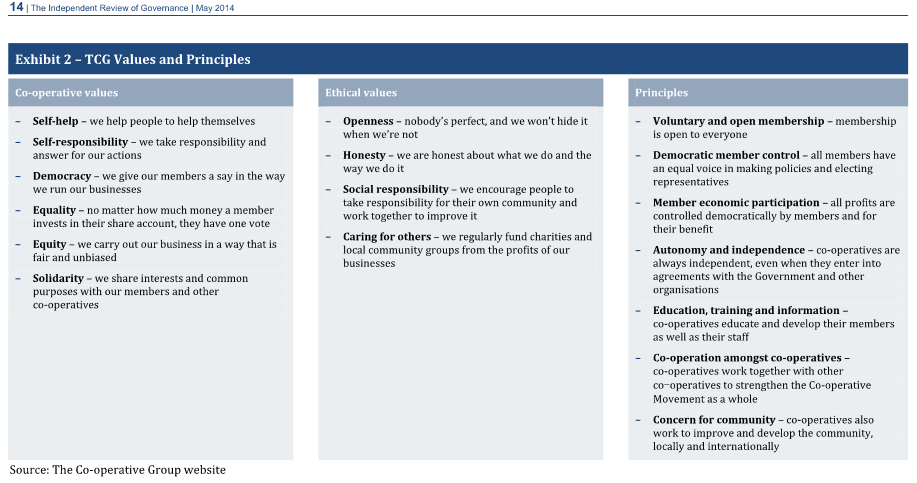 These are not solely the province of elected representatives. They should be deeply embedded in the business culture and permeate throughout the organisation, from top executives down to those who serve on shop counters.

There are two that I particularly want to highlight:

ETHICAL VALUES: Caring for others – we regularly fund charities and local community groups from the profits of our businesses

PRINCIPLES: Member economic participation – all profits are controlled democratically by members and for their benefit.

Both of these discuss how the profits created by the Co-Op Group should be used. But the existence of profits is simply assumed. I don’t know how many times I have heard people say to me, when discussing the future of the Co-Op Group, “It’s not about profits”. Many co-operators feel more at home with the values of the public sector and the third sector, where service, not profit-making, is the primary objective.

But the Co-Op Group is a commercial business and its job is to make profits. Indeed it MUST make profits. Without them, the social purposes of the co-perators cannot be achieved. In order to redistribute profits, you must first make them.

It was clear to me from Myners’ report that lay directors are often more comfortable discussing how profits should be used than how they should be earned. This reflects a fundamental separation at the heart of the Co-Op. On one side there are what we might call the Value Generators – the Board, Executive and staff of the Co-Op Group – whose job it is to earn profits. On the other side are what we might call the Value Distributors – the co-operators – who have wider social interests and responsibilities. 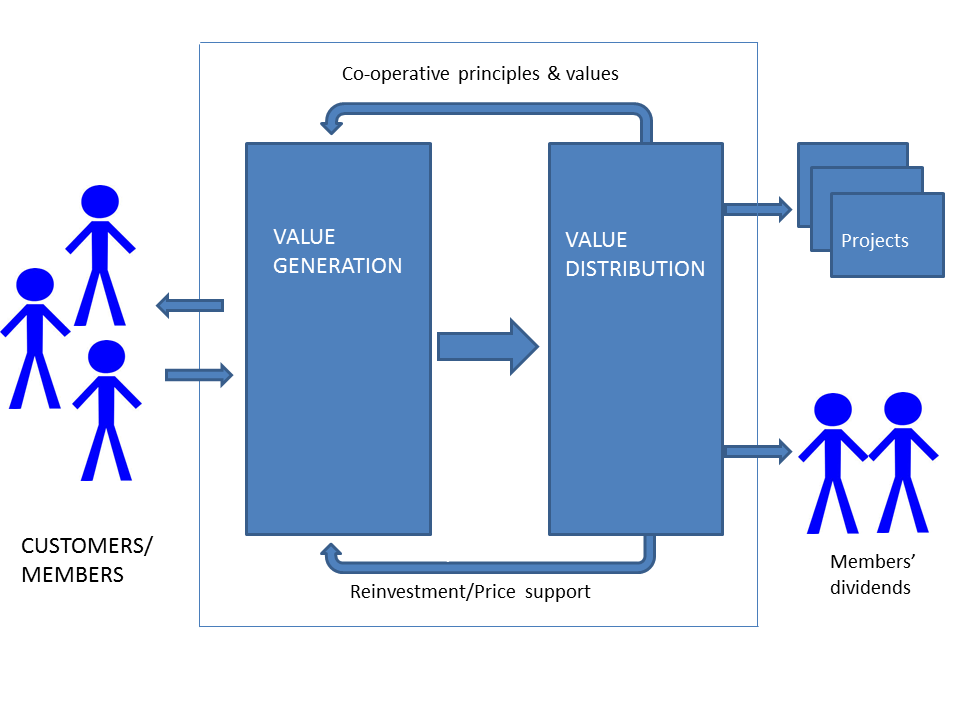 At the moment these two don't trust each other. Co-operators talk endlessly about the need to "control" the executive: the executive, it seems, is trying to sideline the co-operators. This rift is deeply damaging.

Both sides are essential. Both are bound by the same set of co-operative principles. And both have shared objectives. They just have different jobs.

What Myners has attempted to do is reflect this separation in his new Board structure. On the Value Generation side, he has suggested a professional Board which has the knowledge and expertise to run the business on commercial lines while respecting co-operative principles & values. On the Value Distribution side, he has proposed a National Membership Council (NMC), made up of elected Co-Operative members. The new structure would free up lay directors to concentrate on their real interests and enable the Board to concentrate on running the business.

However, he has failed to explain adequately what the relationship between these two bodies should be. And this has unfortunately led to lay directors feeling that they are being “excluded” or “downgraded”. Nothing could be further from the truth.  The Board is accountable to the membership not only for its adherence to Co-Operative principles, but also for the financial performance of the Co-Op Group as a whole.  So the NMC is not a “subordinate Board”, and lay directors have not been “downgraded”. On the contrary, it is if anything an “upgrading”.

If the direction of accountability were clear, then I think Myners' model would be workable - it is, after all, similar to twin governance structures used in many successful co-operatives in other countries. But by itself, it does nothing to heal the hurt and mistrust at the heart of this business. And it is this, above all, that threatens the survival of the Co-Op Group. Unless co-operation is restored between elected members and the executive, I fear it is doomed.

A shorter version of the above was given as a speech at the Cooperatives Renewal conference on 16th May 2014.