On the persistence of inadequate ideas

By Frances Coppola - April 02, 2014
For years now, I have been complaining about excessive focus on "diaphragmatic support" in singing tuition*. Although breathing involves the diaphragm, support of the vocal tone actually uses deep core muscles, and the diaphragm is not under voluntary control anyway so telling students to "support from the diaphragm" is pointless.

And yet the other day I found myself teaching diaphragmatic support.....because for one student, it was the right technique. She needed a counterbalance to her tendency to pull in her upper abdominals (shrinks the waist but is disastrous for singing). In effect, she was singing as if she was wearing a corset. And therefore she needed a singing technique specifically designed to counteract the constrictive effect of a corset. For her, it worked. For most people, it is unnecessary.

The point is that although support of the vocal tone does indeed come from deep core muscles, the diaphragm itself plus the intercostal muscles and upper abdominals (which are incorrectly called the "diaphragm" by most people) still have a role to play, and when they don't do it adequately, the rest of the system doesn't work properly. But that doesn't mean that they should be the only - or even the main - focus of technical singing tuition. We can say that "diaphragmatic support" is an inadequate but occasionally helpful description of the role that the diaphragm and associated muscles play in the physical generation of singing tone.

Now, you don't really think this post is about singing technique, do you? Of course not. I am using this as an analogy for the money multiplier, about which there has been a fierce debate in the economics blogosphere ever since the Bank of England produced its (now notorious) paper on money creation.

I have been saying for years now that the money multiplier does not adequately explain how money is created in a modern fiat money economy. In particular, the idea that banks are passive intermediaries who simply respond to injections of central bank money by creating more loans is fundamentally wrong. Banks actively determine the amount of "inside money" circulating in the economy. When they create loans or buy securities, inside money increases. When loans are repaid or written off, or securities are sold, inside money reduces. The constraints on bank lending are multiple and complex, and don't include reserve availability (though the price of reserves is a constraint). The Bank of England's description of the process is broadly accurate.

Having said that, though, as a descriptor of the relationship between inside and outside money in the economy, the money multiplier is not wrong. It is merely inadequate. For example, I might look at this chart: 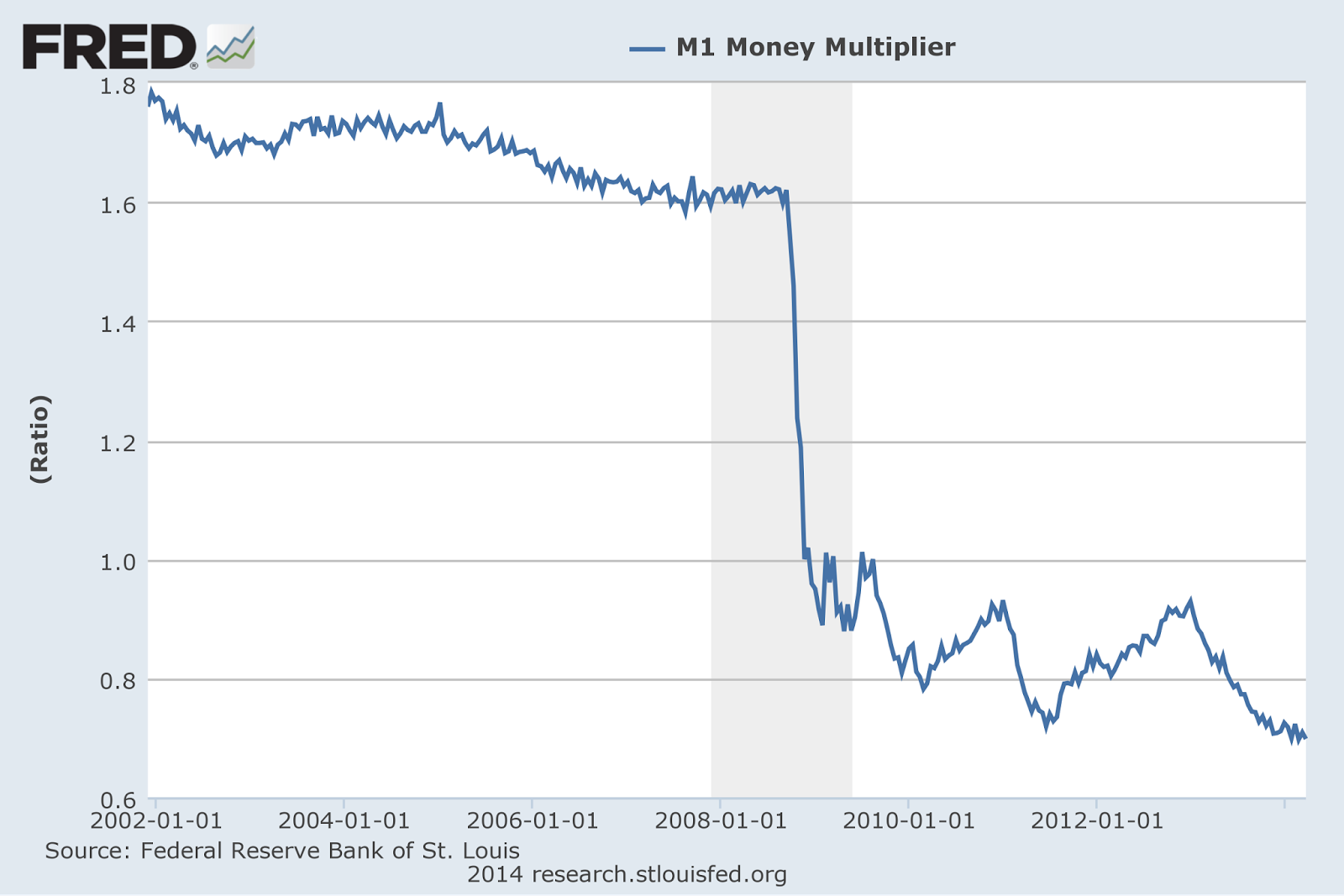 and conclude that there was no credit bubble in the run-up to the financial crisis - in fact if anything, lending slowed. I would be wrong, wouldn't I? Indeed I would. The money multiplier did not move, because the production of M0 was tracking the production of M1 (which was leading which is not obvious, but they were approximately correlated): 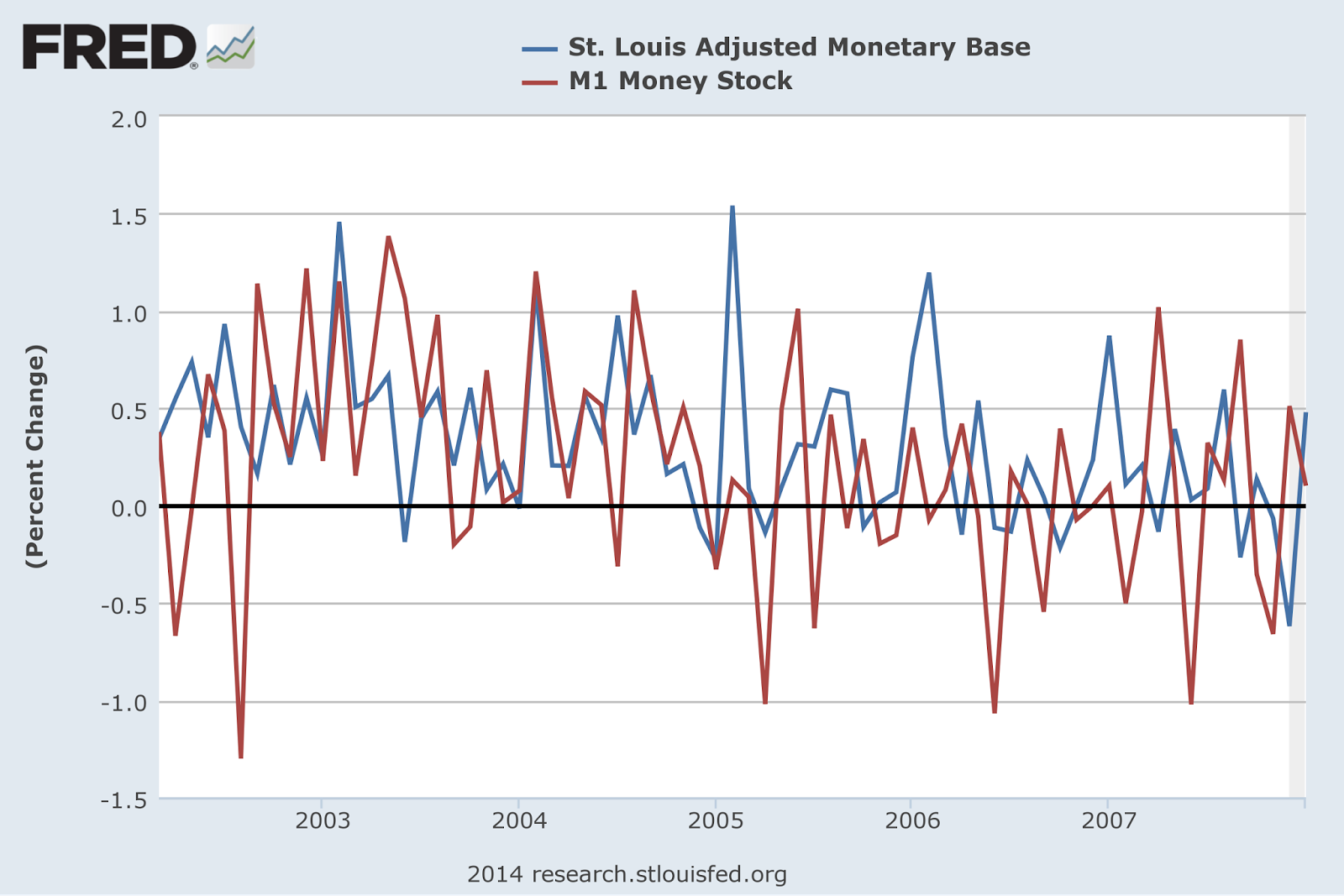 But of course that is how things worked before the 2008 crisis. Since the crisis, central banks have been creating base money at an unprecedented rate. And now our money multiplier might actually be some use, since base money is no longer simply responding to reserve demand - it is exogenously determined. Oh wait, though....LSAPs cause M1 to increase too, because most purchases are made from investors rather than banks. Therefore M1 itself is now to a considerable extent exogenously determined. So the money multiplier now tells us even less than it did before.

Of course, you might believe that the behaviour of one monetary aggregate gives you enough information to enable you set a credible path for future growth and/or inflation, and you don't need to concern yourself with the mechanism by which this controls aggregate demand. But if this is your belief, then you are similar to a singing teacher who is not remotely interested in the behaviour of the deep core muscles but believes that getting the diaphragm properly braced will automatically result in the whole skeleto-muscular system working efficiently to produce the desired singing tone. I suppose it's possible, but it seems a pretty heroic assumption. Is there really a reliable mechanical relationship between base money and broad money that can be exploited solely by controlling the base without taking account of the role of bank lending decisions in the multiplier effect? It seems most unlikely to me.

Monetary wonks may at times find the money multiplier to be the most effective way of explaining some particular aspect of the monetary system, just as I found diaphragmatic support an effective technique for my "virtually corseted" student. Indeed I used the money multiplier myself recently in a post about the IS-LM model in an endogenous money context. It is therefore occasionally helpful. But I don't think it is by itself an adequate description of how the monetary system works. And I can't see how the money multiplier is remotely suitable for teaching to first-year economics undergraduates, or first-year students of banking and finance for that matter, unless it is accompanied by modules that explain how bank lending and broad money creation work in practice.

I'm with Simon Wren-Lewis on this. At undergraduate level, the money multiplier is long overdue for replacement with an accurate description of how money creation actually works in a modern fiat money economy.

Disclaimer: I was taught the money multiplier myself as a first-year MBA student.

* In classical singing, diaphragmatic support technique braces the upper abdominals and intercostals to keep the diaphragm taut as breath is released, enabling the student to maintain constant subglottic pressure. In classical acting, diaphragmatic support involves a hard outwards push from the upper abdominal muscles, creating a powerful edged tone. The classical acting version is used in contemporary musical theatre. You really wanted to know that, didn't you?