By Frances Coppola - June 02, 2012
I wasn't going to do another chart-based post for a while. But I couldn't resist this one:

We hear a great deal about American public debt. And yes, it is a lot - it is now over 100% of GDP (this chart stops at 2011). And as numerous people have pointed out, it doesn't include future unfunded liabilities. The administration is under pressure to cut deficit spending, balance the budget and stop the debt growing - or even, ideally, start reducing it by running budget surpluses. The last President to do this was Clinton - you can see the effect of the "Clinton surpluses" on this chart in the latter half of the 1990s. Is this the right course of action now?

Well, from what this chart is saying, absolutely not. It would be completely counterproductive and might even plunge the US into a 1930s-style depression.

To explain why I think for the US to attempt to balance its budget is madness at the moment, it's necessary to analyse this chart. We know quite a bit about the course of American history from 1920 onwards. The 1920s were a period of rapid economic growth which ended abruptly with the Wall Street Crash in October 1929. Note the sharp rise in private borrowing at the end of the 1920s, and the corresponding rise in public debt. Private debt fell off a cliff from 1931 onwards as the Depression took hold - Irving Fisher's famous "debt deflation" - but public debt also fell, suggesting that public spending was not being maintained. Now before anyone points out that public debt and public spending aren't the same thing, here's US public spending as a % of GDP for the same period. It shows a sharp increase in public spending at the start of the 1930s and then pretty flat spending until the US entered World War II: 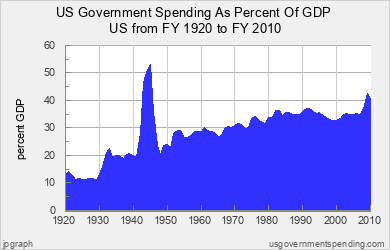 These charts show that there was pro-cyclical fiscal policy throughout much of the 1930s. No wonder the Depression was so appalling; the private sector was undergoing rapid, catastrophic deleveraging and there was little support from government for the people affected. And Steve Keen's chart strongly suggests that it was the spike in public spending in World War II that finally pulled the US out of depression, because it provided the counter-cyclical stimulus that the US economy desperately needed. What a pity it took a major war to persuade politicians to do the right thing.

Compare this with the period from 2000-2007. Note the massive rise in private debt - and the pro-cyclical rise in public debt. No-one in the Bush administration did anything to lean against the unsustainable rise in private debt, particularly mortgages. No, they were busy with other things. The rises in public spending in the 2000s arise at least partly from the Iraq and Afghanistan wars.

From 2007 onwards there has been an explosion in US public spending: it is rising exponentially as a percentage of GDP. The right wing's complaint is that public spending is out of control.

But if you look at the private debt line, you can see that since 2007 it has fallen off a cliff. In fact the private sector is now deleveraging at about the same pace as in the 1930s. But this time, the administration is providing fiscal support, which is why public spending is rising at a similar pace. This is the essential counter-cyclical stimulus for which Americans in the Depression had to wait 10 years. It leans against the desire of the private sector to deleverage and save, and provides support to the people affected. The Obama administration is doing EXACTLY the right thing. I hope to God they don't waver now. Attempting to tighten - as the right wing would like - would choke off the US recovery, impede the progress of private sector deleveraging and cause misery to thousands.

I don't, however, think they should be doing more. The automatic stabilisers seem to be doing their job satisfactorily and the counter-cyclical stimulus appears to match the private sector contraction pretty well. Kenneth Rogoff points out that high public debt acts as a long-term brake on growth, so expanding it unnecessarily doesn't seem to be a particularly sensible strategy.

What puzzles me in all of this is why there is so much noise from business interests about needing to cut the public sector in order for the private sector to expand. Where is the evidence that the private sector WANTS to expand? Deleveraging is contraction, not expansion. Yes, I know that a lot of the debt reduction is residential mortgages, which took a huge hit in the financial crisis and haven't yet recovered. But at the moment the private sector overall shows little inclination to expand: corporates are sitting on huge cash balances, households are saving like crazy, and those that are still over-indebted are trying to shed their debt as quickly as possible. Unemployment is still high, especially among the young. Clearly the US economy is not running at anywhere near full capacity - so what is the panic about? No way is the public sector "crowding out" private sector growth. On the contrary, the private sector's behaviour suggests that it wants to contract further and would be only too pleased for the public sector to plug the gap. Provided they don't have to pay for it, of course - and there's the rub.

There is a prevalent right-wing belief that high public spending now means high taxation later. And they could well be right. It's a bit of a gamble: public support is cheap at the moment, because US interest rates are so low (more on that in a moment), but it will have to be withdrawn later on when the economy picks up, which will be unpopular among the beneficiaries, most of whom have votes. The difficulty is judging when that moment arrives, and having the political courage to make the necessary spending cuts. If those cuts are not made, there will indeed need to be higher taxation as interest rates rise. But to me, at any rate, it is very clear that we aren't there yet. And despite the comments from business interests, market behaviour supports my view: they want the US to continue deficit spending and issuing debt. US yields rates could hardly be lower, yet show no sign of rising despite the US's high public debt.

This situation does need to be treated with caution. US government debt is used as collateral by the shadow banking network, and because of two rounds of QE and a fair amount of hoarding it is now in short supply. Providing liquidity to desperate markets is not in itself a good reason for issuing more government debt. But it does suggest that the bond markets are not likely to start punishing the US with higher yields any time soon.

And there is another reason why the US should not be attempting fiscal tightening while the private sector is deleveraging.  I mentioned unfunded liabilities. There are an awful lot of these and the US right wing is justifiably worried about them. But their solution is wrong. The US will only be able to fund these if the private sector is restored to health. And for this, it must shed more of its debt pile, which even now dwarfs public debt, as Steve Keen's chart shows. If the US attempts to restore fiscal balance while the private sector is deleveraging, it will impede the progress of that deleveraging, delaying the onset of significant private sector expansion and making it LESS likely that the US will be able to meet its unfunded liabilties in the future. It could even tip the US back into recession.

The message to the deficit-hawks is clear. The 1930s debt-deflation-without-support was terrible. It ruined the lives of an entire generation. The US has avoided making the same mistakes in the current crisis, but premature tightening would upset the applecart. They should pay attention to US history and learn to be patient.