By Frances Coppola - May 12, 2012
The other day, Veronique de Rugy produced this chart from Eurostat statistics for European Union government spending

.
Various writers picked it up as evidence that there haven't been any serious spending cuts anywhere in Europe yet. Sam Bowman at the ASI complained that Eurocountries are moaning about the idea of spending cuts rather than the reality, and warned that the real nightmare is still to come. Is he right?

There are some serious issues with this chart:

- it uses nominal figures rather than real, so does not allow for the effects of inflation. To be fair, De Rugy herself bewails the lack of inflation-adjusted figures.

- the UK's figures are shown in Euros. The UK is not a member of the Euro, so these are translated figures. Sterling was devalued by approx. 25% in 2008/9 versus the Euro: it is creeping back up again but has not yet reached its pre-crisis levels.

- no allowance is made for cyclical factors and the operation of automatic stabilisers. Government spending automatically increases when GDP falls and unemployment rises, as benefits replace wages and higher deficit result in increased interest payments. Conversely, as GDP rises and unemployment falls, Government spending automatically decreases as people move off benefits and into work, business expands and deficit reduces.

So this chart is, shall we say, somewhat misleading. I spent a happy evening wading through Eurostat figures for the countries in question plus Germany, and came up with some charts of my own which I hope are rather more useful. I am rubbish at Excel and haven't really got the hang of this charting lark, so please bear with my hamfisted attempts at formatting.

Firstly, here's a chart of Government spending expressed as a percentage of GDP for the countries in question: 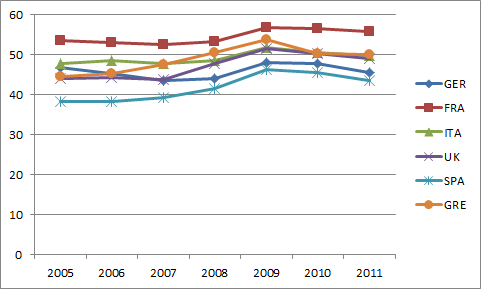 You will notice that all the lines are fairly close together, which makes it difficult to read: this suggests that in fact all these countries including the mighty Germany generally have a similar proportion of government spending to economic activity. 45-50% seems to be fairly standard: France is persistently higher, and Spain persistently the lowest. The second thing to note is that ALL the countries show an increase in Government spending relative to GDP 2008/9.  All of them have reduced government spending as a proprtion of GDP to some extent, but none has yet managed to get government spending back to pre-2008 levels. It is very clear therefore that the increased Government spending of deficit countries is mainly due to the financial crisis and ensuing recession. It is also very clear that the supposedly excessive spending of these countries is actually remarkably similar to the spending level of the supposedly prudent Germany - and quite a bit less than France.  So can we please stop talking about profligate Southern states? With the exception of Greece (to which I shall return), they are evidently no more profligate than anyone else.

I've also plotted GDP by itself for each of the countries in question: 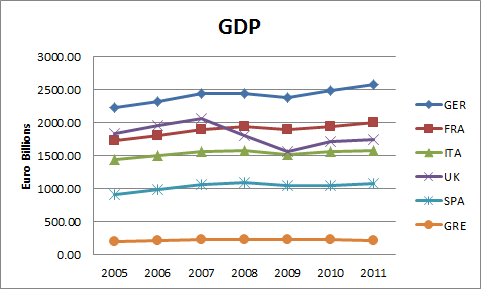 It is very clear from the chart that the UK was by far the hardest hit economy in the financial crisis and ensuing recession. I've left the UK's figures in euros, so the drop in GDP is overstated to some extent from mid-2008 onwards because of the devaluation of sterling. Nonetheless, the UK's economy fell off a cliff in 2007/8 and is still well below its level at the start of 2007. This is unquestionably because of the dominance of the financial services sector in the UK economy and its close ties to the US.

I've probably sent most of you to sleep by now, but if anyone is still awake here are a few more charts to amuse you. I've plotted government spending % of GDP against GDP itself for each of the countries. The purpose of this is to demonstrate how government spending varies as a proportion of GDP as GDP changes.   I've done one chart for each country because otherwise it gets very complicated and difficult to read. The Eurostat GDP figures are in millions of Euro: for all countries except Greece I have divided by a further 100,000 to get to a 2-digit figure, so the figures are in 100bn increments. Because Greece's economy is so much smaller I have only divided by 10,000, so its figures are in 10bn increments. I hope that makes sense. 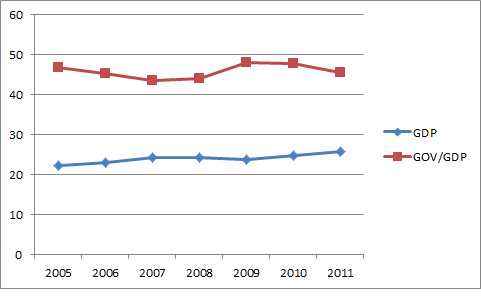 Germany's habitual fiscal tightening is evident. Note the drop in Government spending both before 2008 and after 2009 is sharper than the corresponding rise in GDP: if nominal Government spending were being maintained one would expect these at least to match - and as I pointed out above, really the proportion of Govt spending to GDP should remain constant as GDP grows. Germans know what austerity is like - they have experienced it every year since 2000 with the exception of 2008. I haven't looked at wage levels, but I'd be willing to bet that those are held down too. I think they call this beggar-my-neighbour. At this point I wonder if France and Germany really have anything in common. Not only does France have the highest proportion of Government spending to GDP of any of these countries, it has made no attempt to cut it. Sam's comments about unrest being more about the idea of austerity than the reality certainly apply to France. The variation in Government spending to GDP shown in the chart can be entirely explained by cyclical factors. 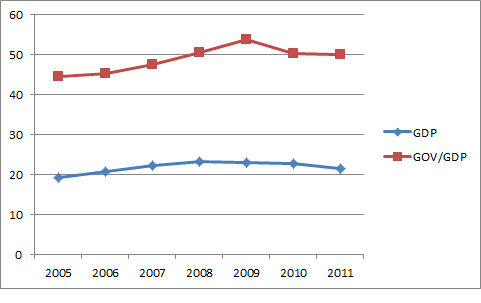 Note the rise in Government spending relative to GDP until 2009. This is the unsustainable debt bubble that is now collapsing, causing pain and hardship particularly (though not exclusively) to those Greeks whose livelihoods depended on that bubble - notably public sector workers, pensioners and welfare recipients. But these figures suggest that it isn't collapsing that fast, really.

Spain's chart is almost the opposite of Greece's, and I feel genuinely sorry for them: 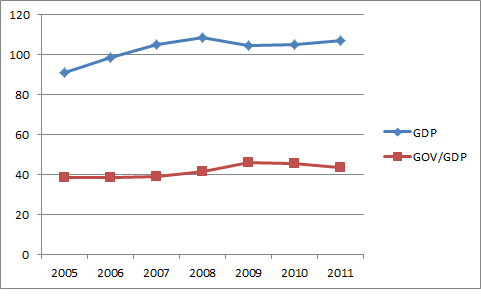 Prior to the financial crisis their GDP was growing and they were maintaining but not increasing government spending as a proportion of GDP. They were doing it right - more right in my view than Germany, which was putting its population through unnecessary pain. But they were caught by the collapse of the property market in 2008, and now are under pressure to reduce their government spending back to pre-2008 proportions. This pressure is being applied principally by Germany, which according to my first chart still has a HIGHER proportion of Government spending to GDP despite all its austerity. There is absolutely no justice in the Eurozone.

Italy for some reason over-reacted to the financial crisis, expanding its Government spending relative to GDP perhaps more than was really justified: 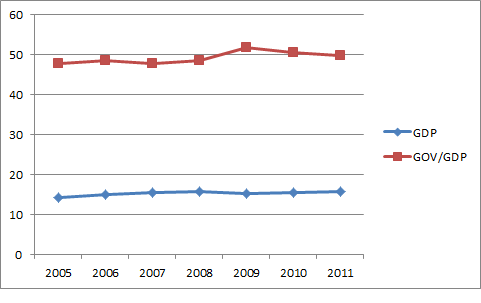 And finally - the UK: 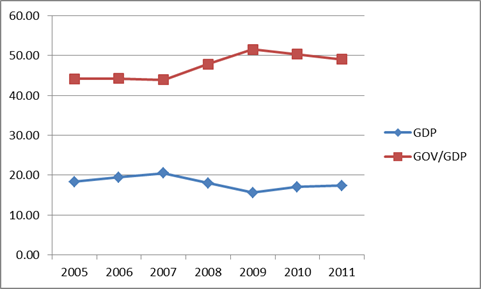 It is evident from the chart that the Brown government responded to the economic collapse in 2007/8 by increasing Government spending considerably as a proportion of GDP. This is a Keynsian response to a severe economic downturn. Economists are undecided on the effectiveness of Keynsian stimulus, but I find it telling that as the proportion of Government spending to GDP has fallen since 2009, so the rate of increase of UK GDP has also begun to slow (see the shallower angle on GDP 2010-11).  I know correlation does not imply causation, but I find it difficult to believe that there is no relation between these two. For me, there is sufficient evidence here a) that the UK Government is indeed making spending cuts, whatever the ASI may think, although as yet not very deep ones b) that those spending cuts are associated with slower growth. The operation of automatic stabilisers should cause the proportion of Government spending to increase not decrease as growth slows - the reverse is simply not possible. Therefore I am forced to the conclusion that there are indeed real spending cuts and that those spending cuts may be causing UK GDP growth to slow (although there may also be other reasons for the slowdown).

So Sam Bowman is both wrong and right. There are genuine spending cuts, though not in every country and not all that deep, even in Greece. But his final conclusion is worryingly accurate. Whether or not these countries are making spending cuts now is not the issue. It is what they still have to do to restore their economies to health. I was struck by the similarity in the GDP curves for all these countries - more easily seen on this chart from the World Bank, which is based from 2000 (I only extracted Eurostat data from 2005, so my chart above starts halfway up the curve):

ALL these countries until 2008 (2007 for the UK) experienced GDP expansion funded by unsustainable debt - and that includes Germany, whose trade surplus is funded by high levels of cross-border assets in both its commercial banks and, since 2008, its central bank. This cross-border debt bubble is currently being maintained by bailouts and central bank monetization. But this is not a sustainable policy. The debt bubble will burst eventually, and when it does all these countries, including the mighty Germany, will experience severe deflation and banking system meltdown.